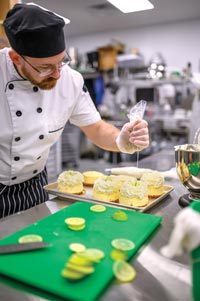 It all started with two broken legs. Jessica Kercher and her two-year-old daughter suffered the same injury in the same week. She wanted to thank a family friend for helping to take care of her daughter. With her husband out of town and no way to get to the grocery store, Jessica used what she had in the house to make one of the trickiest desserts: a cheesecake.

That family friend told a few people about the delicious cheesecake Jessica made, and word spread. Soon Jessica’s culinary skills were in high demand. Five years later, she owns Simply Vanilla Gourmet Cheesecakes, which grew from her kitchen to a new 1600-square-foot restaurant.

Jessica has always had a passion for culinary arts. After receiving a degree in hospitality management, she worked for Sodexo at Liberty University. Jessica left that position to start a family—and ultimately found her dream job. “I always felt like there was something more,” she says. “I loved talking to people, I loved customer service, and I loved the art form of pastries themselves.”

One of the first things Jessica did was come up with a name for her new business. “From the very beginning, it had a name. It had a brand. The brand spoke for itself. Simply Vanilla came from the fact that it came from one recipe, one idea. A simple idea,” Jessica says.

She secured food safety certifications to make cheesecakes in her kitchen. Then the Kercher family moved from Lynchburg to Forest to a home with a bigger kitchen—and the business grew from there. “I would wake up at 2 or 3 in the morning and I would bake until my kids had to go to school,” Jessica says. “So I knew I had a certain timeline. Eventually that timeline went all night.” 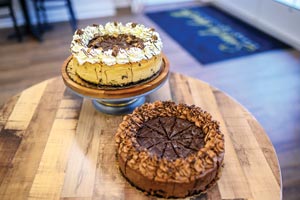 She sold out of pop-ups at River Ridge and partnered with other restaurants like Bean Tree Café and Mission House Coffee. As her cheesecakes gained even more popularity, she decided to bring on a team and pursue a brick-and-mortar store. In August 2019, they signed a lease and built their restaurant in a brand-new shopping center just off Route 221 in Forest.

When you walk into Simply Vanilla Gourmet Cheesecakes, you will see a display of 12 to 15 different cheesecake flavors. A four-inch cheesecake is $10. They also make quiches, scones and other baked goods from scratch, plus a different soup each day. Jessica wants customers to think of this as a meeting place—where you can eat lunch and get something sweet for dessert.

You can also order ahead, a popular choice around the holidays. And in February, Simply Vanilla debuted a new two-bite cheesecake option called “petites.”

Jessica says their top seller is the White Chocolate Raspberry Cheesecake. She sees a lot of customers try that on their first visit, then come back for something more adventurous, such as the Grasshopper or Red Velvet. 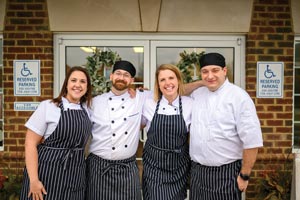 Her team put in a lot of work making sure the restaurant would be a success. They even visited pastry shops in France, taking notes on how they displayed their products. “It is a show when you walk in. It is an experience beyond the taste of the products,” Jessica says. “It is a full package deal when you walk in here.”

Simply Vanilla is a true family affair. Jessica’s husband Ahron Kercher (a nuclear engineer) is the technical expert. Travis Burckhard is the executive chef and his wife Donna is the marketing director. They have big plans for 2020, including the launch of a website where you can place online orders. Jessica says the next step is to offer made-to-order sandwiches and salads.

The team of 12 employees is going to keep testing out new offerings for customers. “The good thing about the business is that we get to play a lot more. We get to try different flavors, we get to play with different savory products,” Jessica says.

Making a cheesecake takes time—and patience. “There’s a reason why people stray away from cheesecake. It is very temperamental,” Jessica says. “It does require a specific process to keep it consistent.”

The team at Simply Vanilla Gourmet Cheesecakes is happy to do that work for you.