Inside the Maier Museum of Art at Randolph College, Laura McManus leads a conversation with a small group of retirement-age men and women. They view the vibrant pop art, mixed media work of Korean artist Sang-ah Choi; McManus, the curator of education, guides the participants through the provocative artwork’s various themes.

After reviewing a few more pieces, they move to a table stocked with watercolor paints, paper and assorted potted plants, where they spend the final minutes of their time together painting images inspired by the art they’d just observed. Most of the participants, attending with a spouse, alternate between laughing about and complimenting each other’s artistic attempts.

The Maier hosts more than 6,000 visitors each year. This could be any of the hundreds of groups that come through their doors. Except for one crucial difference: some of these individuals have early stage Alzheimer’s. 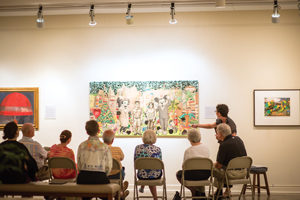 Once a month (every second Thursday), the Maier welcomes men and women who are suffering from the disease, along with their caregivers, to attend a stimulating session that doesn’t presume that Alzheimer’s has affected their ability to critique art. McManus says they typically include three to four works in each session that are connected by a theme.

“The works of art serve as a springboard for conversation, reflection, imagination,” she says. “They freely share personal stories that a work of art reminds them of, like you would with a friend.”

As McManus explains, the group forms “a bond because they are all dealing with the impact of dementia”—especially during the second half of the session, where the participants create their own works of art. McManus says she considers the participants’ ages, skill levels and other factors when choosing each session’s art project. Projects are low pressure, require limited materials and only take a few steps to complete.

“The projects also allow for collaboration between the individual with dementia and their caregiver. They can be accomplished alone or with assistance, so that everyone can enjoy the activity regardless of prior experience,” she says.

Among the group laughing and painting potted plants at the Maier on that June day are Lynchburg residents Chris and Amy Heppner, who will celebrate their 25th wedding anniversary this fall, although they’ve known each other their whole lives.

When they were teenagers, Amy was friends with Chris’ older sister. One day, Chris says it was like he saw Amy for the first time, realizing how beautiful she looked. Their first date was shortly thereafter, and they’ve been inseparable ever since. After they settled down and got married, they welcomed their son Lynch in 1997. (Chris is a direct descendant of Charles Lynch, brother of Lynchburg’s founder John Lynch.)

A few years ago, Amy started becoming more forgetful. Still, like so many people with Alzheimer’s, it was easy to find an excuse. But the forgetfulness became more pronounced.

She had an MRI. Everything looked ok. They carried on. 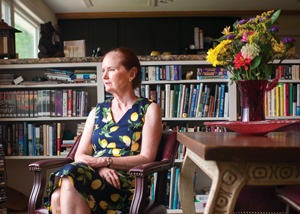 Then, her memory problems became just a little worse, so they went back to the doctor. Finally, in June of 2017, they had an official Alzheimer’s diagnosis after a second MRI revealed lesions on Amy’s brain.

Chris points to a classic example of the disease’s effects with a story from earlier in the day. “We couldn’t find the Band-Aids this morning and I said I just bought a box and I don’t know what you did with them. I found them in the pantry. … That’s not where Band-Aids go, they go up in the closet in the bathroom. …She wouldn’t say ‘Silly me, I put them there’.” He pauses, then continues, “She would say, ‘Well, I don’t know, that’s where they go’.”

There are other little clues. During our interview, Chris asked Amy where their first date was. After a pause, he jumps in to give her prompts. (He took her to his hunting stand, an unusual first date, and Amy wore a long, stylish trench coat, expecting to be taken to a restaurant. Chris laughs about how she casually played it off as though she wore high fashion in the woods all the time.)

It’s the sort of quick-thinking cover that a partner gets used to as they adapt to their loved one’s early journey with Alzheimer’s, suddenly becoming the memory and reason, the mental compensation for their partners in moments like Chris described.

One thing they’ve realized in the past year is just how misunderstood the disease really is. They’ve had reactions from well-meaning individuals who assume Amy has become incapacitated (this couldn’t be farther from the truth). Or, worse, some people worry that it’s somehow contagious (it’s not).

The Heppners found Arts Fusion in the weeks before the official diagnosis when Chris was searching for local resources; they say the art is wonderful, but the companionship of others in the same situation is just as rewarding. According to 2018 statistics from the Alzheimer’s Association, 5.7 million people in the United States are living with Alzheimer’s. That’s why McManus is focused on increasing their reach into the Alzheimer’s community.

“I have been working with the Alzheimer’s Association and adult care centers to get the word out about this opportunity,” she says. “We want to keep the group size intimate (not more than 10 is comfortable), but would be interested in adding additional days if there is interest.”

As a teacher in the Randolph College Museum and Heritage Studies major, she may incorporate Arts Fusion into that curriculum and allow students to be involved.

“Last summer I had an intern who co-led several sessions, and the feedback was very positive,” she says.

For now, her focus is on continuing to look for those “aha” moments in her groups, which she defines as: “the moment when someone sees something in a work of art for the first time, or hears and sees another person’s interpretation that is compelling but not something they had considered.”

It’s those moments that make each session so worth it—and give couples like the Heppners a little hope.

“A connection between thought and memory, between thought and language (word), between image and idea. It shows active reasoning,” McManus says. “I know that the research shows engagement in the arts is beneficial for individuals with early onset dementia. But it is extremely gratifying and inspiring to actually see it happening in real time.”

Arts Fusion
Maier Museum of Art at Randolph College
Second Thursday of every month from
10 – 11 a.m.
Registration is required.
https://maiermuseum.org/education/arts-fusion/

Memory Café
Central Virginia Alliance for Community Living conference room
501 12th Street, Lynchburg
Last Tuesday
of every month
from 1 – 2 p.m.
There is plenty of parking, and snacks are provided.