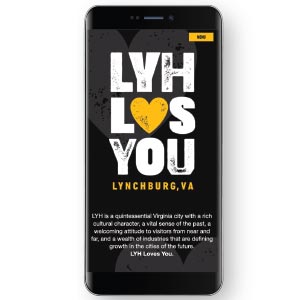 Lynchburg is open for business and is here for you.

This is the message of a new brand campaign that the Office of Economic Development & Tourism (OEDT) is hoping will reach residents, visitors and those looking to relocate.

The new “LYH Loves You” website focuses on living, visiting and working in Lynchburg. It connects to content on the city’s tourism site and economic development site, integrating the two under one brand, look and feel, said Anna Bentson, assistant director for the OEDT.

The campaign is designed to create awareness about the city and all it offers, instill pride and help people feel like they belong, all while leveraging the state’s iconic “Virginia is for Lovers” messaging.

“The concept behind LYH Loves You revolves around the citizens, businesses and organizations of Lynchburg—and their stories,” she said. “From print to social media to organic promotion, the campaign will be a central rallying cry, one platform with spokes that reach residents, talent, businesses and visitors alike.”

During the pandemic, Bentson’s department looked to stakeholders to find out what were the most important things the business community needed. The key takeaways from those conversations were that the business wanted better communication from the city.

Over the past year, the OEDT worked with a steering committee, held workshops and focus groups, sent out stakeholder surveys and chose the brand campaign, which has been in development since last summer.

While the four key audiences of the campaign are residents, businesses, talent and visitors, Bentson said they hope to especially target transplants as well as those who grew up in the area, moved away and are looking to return to the city after seeing all of its positive changes and growth.

Another priority is using the campaign to shift some perceptions about a lack of attractive jobs in the city. Area businesses have wanted help in selling the city to new talent as well as to retain their workers, Bentson said.

Brand ambassadors for LYH Loves You will help with this sales pitch.

“The campaign will showcase Lynchburg’s brightest, kindest and most creative and hardworking communities through ambassadors—featuring the business owners and citizens who are doing this work every day, revealing the character of the city, the inclusive nature of our people and our outsized ambitions,” Bentson said.

Family-operated and local downtown business The Water Dog is a brand ambassador for the campaign.

“Those of us that live and work in Lynchburg know how wonderful we are as a city but I think the message has had a hard time getting out to other parts of Virginia,” owner Dave Henderson said. “And I think the way that this campaign has been strategically organized, it does a really great job of shining a light on the fact that Lynchburg is open for business and Lynchburg loves you.”

Lynchburg holds a very diverse community of people, he said, and the city celebrates
that diversity.

“That’s one of the aspects of this campaign that I really like,” he said. “It’s not just particularly aimed at one sector or one type of business but it’s aimed at a myriad of businesses and business owners as well as women, people of color, LGBTQ+, all of these different communities of people.”

Another brand ambassador is Amy Corbett, owner of All Belong Co., an Airbnb design, consultant and management company. She said locals ask her if people really come to visit Lynchburg very often.

“And I smile because I know what a gem of a place we have,” she said. “As we welcome guests from all over the world to Lynchburg year-round, we have the privilege of showing off the very best our city has to offer in lodging, dining, and activities.”

She said she is excited to partner with the city in spreading a message of inclusivity and belonging as that is already at the core of her family’s small business.

“LYH Loves You feels like a natural extension to what we already do and who we already are,” she said. “Hopefully this campaign will help Lynchburg be known for the things, people, and places that truly make it great.”