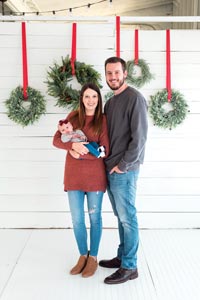 Forget what your grandmother, or even your mother, told you about how a baby sleeps best. It could be fatal advice.

Every year researchers are finding new techniques to prevent infants from suffocating in their sleep.

“The biggest thing they taught us was to be sure they are lying on their backs,” said Victoria Solomon, whose daughter was born in September at Virginia Baptist Hospital. Like many new parents, Solomon said she was most concerned about Sudden Infant Death Syndrome, when babies die in their sleep for no apparent reason.

Solomon and other mothers are benefitting from a new program being used by Centra, which was recently recognized by the National Safe Sleep Hospital Certification Program with the highest designation as a “Gold Safe Sleep Champion” for their commitment to best practices and education on infant safe sleep.

“Sleep-related death (SRD) results in the loss of more than 3,500 infants every year in the U.S.,” Michael H. Goodstein, M.D., neonatologist and medical director of research at Cribs for Kids®, said in a news release. “We know that modeling safe infant sleep in the hospital and providing education to families has a significant effect on infant mortality. Cribs for Kids Hospital Certification Program is designed to recognize those hospitals that are taking an active role in reducing these preventable deaths.”

Last summer, Centra began using swaddles on all infants born at Virginia Baptist Hospital, funded by the Centra Foundation. “Right after Ellie Grace was born, one nurse taught my husband how to swaddle while another helped me,” Soloman recalls.

Dr. Holly Turner, a Centra pediatrician, says swaddling infants prevents them from waking when they have a startle response, keeps them warm, and simulates the security of the womb.

One of the newer recommendations from the American Academy of Pediatrics is to keep the infant in a bassinet or crib in the parents’ bedroom for the first six months to a year. “You are within earshot if the child is having a choking episode or is in any kind of distress,” Dr. Turner said.

While monitors can alert parents to trouble, it’s difficult to see what’s actually happening, she added, so it’s better to have an immediate visual of the baby. It’s also far more convenient for nursing mothers to have the child nearby.

Solomon said she and her husband sleep well with their daughter in the room and that it’s reassuring to know the most up-to-date practices for sleeping infants. “I think SIDS was always a concern for us,” she said.

While infants should be in your room, you should never sleep with them in your bed because of the chance of rolling over and suffocating them, Dr. Turner added, explaining how most SRDs occur at four to five months. 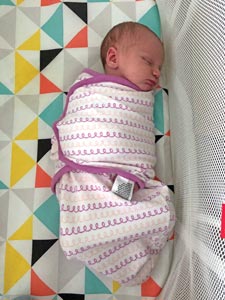 According to the Centers for Disease Control, there were 3,600 sudden unexpected infant deaths (SUID) in the United States in 2017. These deaths occur among infants less than one year old and have no immediately obvious cause.

The three commonly reported types of SUID include: sudden infant death syndrome (SIDS), unknown cause, and accidental suffocation and strangulation in bed. Of those deaths, 1,400 were due to SIDS, about 1,300 deaths due to unknown causes, and about 900 deaths due to accidental suffocation and strangulation in bed.

Dr. Turner said doctors still don’t know what causes SIDS, but accidental suffocation and strangulation can be prevented by following safe sleep guidelines, which also include keeping a baby’s sleeping surface firm and free from blankets, pillows, stuffed animals, or crib bumpers. “I talk to parents about that until my face is blue,” she said.

Putting infants on their back has proven the best position, Dr. Turner said, because children normally turn their heads if they spit up. On their stomachs they have no way to turn their heads and can suffocate. Dr. Turner also noted that pacifiers can help reduce the chance of SIDS, though it’s not clear why.

All the Centra pediatric nurses and physicians talk to new moms about best sleeping practices, as well as demonstrating them at the hospital while mother and child are there. Women with vaginal births stay 48 hours, while those with Caesarean sections stay 72. New moms also get handouts about safe sleeping. “The more knowledge you give parents, the more numbers [of deaths]decrease,” Dr. Turner said. 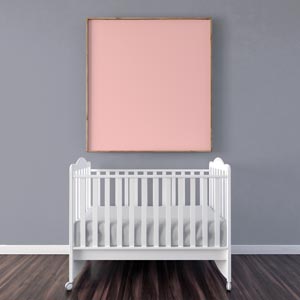 • Place the baby on his or her back on a firm sleep surface such as a crib or bassinet with a tight-fitting sheet. Use a swaddle or sleep sack.
• Avoid use of soft bedding, including crib bumpers, blankets, pillows, and soft toys. The crib should be bare.
• Share a bedroom with parents, but not the same sleeping surface, preferably until the baby turns one but at least for the first six months. Room-sharing decreases the risk of SIDS by as much as 50 percent.
• Avoid baby’s exposure to smoke, alcohol, and illicit drugs.