Instead of running away from things that go bump in the night, Woody Watts always runs toward them.

“My wife and I even got married on Halloween,” Watts said. “We’ve always wanted to be like the Addams Family, but I think we’re more like the Munsters.”

Watts can trace his love for investigating the unexplained back to his childhood, when he was obsessed with radio dramas and “The Twilight Zone.” He even made his own short films with a VHS video camera. As an adult, Watts combined his love for spooky stories with his knack for creativity and founded Hill City Paranormal in 2019.

“It all began a few years ago when the Academy Center of the Arts began doing their haunted tours around Halloween, and they asked my video company to get involved,” Watts said. “I jumped at the chance and asked if I could bring in my own team to do some investigating.”

But Watts wanted to be official, so he created a logo, website, and Hill City Paranormal’s “Haunted Hotline,” so people could dial in and talk about their own paranormal experiences.

One of the first stories Watts started investigating in Lynchburg was the legend of the Rocking Cradle House on Jackson Street—and now in 2020, there is confirmation by some local experts that the cradle has reappeared. 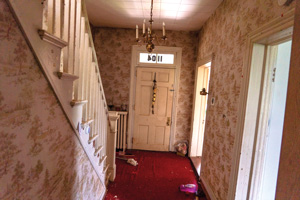 The house, which even has its own plaque commemorating the legend, has been the subject of a number of eerie stories dating as far back as the 1800s. Built by Bishop John Early in 1834, it became the home for a traveling minister named Smith.

“There are several different versions of the story,” said Christian DePaul of the Lynchburg Historical Society. “And everyone tells the story differently. That’s what makes these stories so interesting.”

The story goes that a woman—who DePaul said could have been a house slave, caregiver or even Smith’s wife—was tending to a baby. They noticed the baby’s cradle was rocking back and forth on its own. Early was quickly alerted and brought to the house. He declared that the cradle was possessed and yelled, “Beelzebub, be gone,” and the cradle stopped. But when he would say, “In the name of Beelzebub,” the cradle would begin to rock again.

The cradle quickly became a tourist attraction in Lynchburg after Early realized that he could control when it started and stopped rocking. Yet, all good things come to an end—even spooky ones. After a few weeks, the cradle stopped rocking for good. However, to make sure it didn’t become possessed again, Early had the rockers sawed off and shoved the cradle into the attic.

According to DePaul, the spooky tales about the house continued. After the Civil War, the house was used as a hospital space and a major began living with a family there. The tale goes that the major suffered from post-traumatic stress disorder and, during one of his episodes, the family would lock him in the dining room. Supposedly at midnight, if the dining room doors are closed, they will slowly creak open and the walls will begin to pulse.

Even in the 1980s, renters in the house found an old Fisher Price rocker in the attic—that also began to rock on its own, even with its missing batteries. The renters ran out of the house and never returned after that.

So what happened to the cradle? Well, according to DePaul, it has resurfaced and is currently sitting in a local antique shop while the shop’s owners decide what to do with it. How it got there they don’t want to say, and are staying very private about the cradle for now. But DePaul said he has seen photos of it. Sure enough, both of the rockers are sawed off.

“It’s such a great story,” Watts said. “It’s one thing to hear a story, but it’s another thing to actually find proof.” 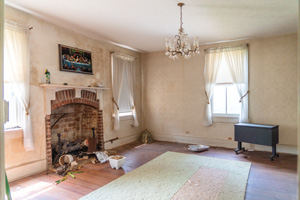 Local realtor Betsy Ferguson says she saw the cradle, with its rockers sawed off, last February when working with some homeowners. They told her it had been in their family for many years, and they weren’t sure what to do with it. “I told them to get rid of it,” Ferguson said, describing the feeling she had while inside their home as “creepy.”

Watts visited the Rocking Cradle House on Jackson Street while we worked on this story. It is in foreclosure and a worker who is tearing down old structures inside granted him access. “Honestly, the house gave me a headache,” Watts explained. “I was told no one will stay in it long so they are cleaning it out. Even the worker has heard the stories and gets weirded out working there.”

Watts is hoping they can convince the owners of the cradle to come forward so they can continue tracing back its origin to confirm if it is, in fact, the original cradle from Lynchburg’s Rocking Cradle House legend.

“With finding something like the cradle, it’s part of the history of Lynchburg,” he said. “And if it’s out there, that means it’s not the end of the story.”

DePaul said there could be a number of reasons the cradle has survived all these years.

“It could have changed hands or became a family heirloom because they were fearful of it or just kept it out of respect,” he said.

But is it true? Is the cradle truly haunted? DePaul said you need to look at the evidence.

“I always have to do my own investigative work to verify a claim,” he said. “Sure, there are always embellishments and different versions, but when you hear four, five, or six people tell similar stories, you have to think that something may exist.”

That’s what Watts has tried to do as well when looking into other tips sent in to the “Haunted Hotline.” He has calls from all over the country, even from as far away as Alaska. So far, he’s produced more than 70 episodes with new calls coming in each week. Investigations have taken him down to Littleton, N.C., to hunt Big Foot and to near Luray Caverns to talk to someone who says they were abducted by aliens.

“I feel like when the pandemic started, we got a huge surge of calls because people were cooped up in their homes for the first time in a long time,” Watts said. “The pandemic forced people to slow down and finally notice what was going on around them.”

Watts said they’ve fielded calls about anything from haunted stuffed animals to flickering lights to UFO sightings. But mainly, the hotline has given people a safe space where they can talk about their experiences without judgment.

“There’s a stigma associated with talking about the paranormal,” Watts said. “People don’t want to be labeled as crazy and that’s why we introduced the hotline. People could tell their stories to help them talk about it and process it.”

Now that Watts has tapped into the supernatural in the Hill City, he wants to see more people take an interest.

“I think there could be an opportunity here in Lynchburg to talk about this kind of stuff,” Watts said. “I understand that sometimes businesses don’t want to take that approach. But I don’t know. It might be fun to see a plaque here or there that talks about the more [spooky history].”

Other Haunted Tales
in Central Virginia:

The Rocking Cradle House isn’t the only ghostly tale about the Hill City.

“In my experience, Lynchburg has some of the most paranormal activity I’ve ever seen,” DePaul said. “It may have something to do with our involvement in the Civil War and the city’s spiritual roots.”

For instance, during the Civil War a soldier wandered into a house on Pearl Street where a young woman was playing the piano. The soldier sat down in a chair to listen to her play, but when she finished, the young girl realized the soldier had died. The story goes that if that exact tune is played in the house again, the image of the soldier appears in the room.

“People are always skeptical to tell you something like that,” he said. “But there are people who I know and trust who have talked about their own experiences.”

After a fire in the Sweet Briar House in the late 1920s, a story appeared in the student newspaper that contained reports of faculty and students spotting a woman and a child enter the house and then leave again.

Sweet Briar was even featured in Syfy’s “School Spirits” in 2012. The episode featured student Dani Humphrey, who talked about her ghostly experience while attending Sweet Briar.

At Appomattox Court House, a slain Union Lieutenant Colonel named Augustus Root was known to hang about the grounds. Root was buried in the yard of nearby home, which is now the headquarters for the park. A 1939 postcard dubs the home as “The Haunted House of Appomattox.”