Art, in its many forms, has become a source of distraction and comfort to many of us during these disconcerting times. Community-driven art initiatives are especially important—they serve as tangible reminders of what we can accomplish and share with the world when we work together.

Bedford’s recent beautification initiative, known as “The Loop Project,” is a shining example of what community partners can achieve. Some of the most recent additions to the Loop, the town’s popular walking route, are steel-fabricated benches and bike racks that display a local artist’s unique design.

Last July “The Loop Project” received an AARP Community Challenge Grant, a grant awarded for projects that aim to make immediate improvements and jumpstart long-term progress to help residents of all ages. The project was one of 159 projects selected from over 1,600 applications.

“The Loop is well-known within the town and beyond as a walking destination,” says Bedford Economic Development Coordinator Mary Zirkle. “The existing pedestrian amenities (concrete benches and wood-slat trash cans) were also starting to show wear and needed a facelift.”

The task of beautifying these amenities within the timeframe stipulated by the grant (about four months) was a challenge in and of itself, then town staff decided to add another challenge on top of that: the designs used for the proposed benches and bike racks would be chosen from submissions from the general public.

Fortunately, local artist Megan Davies was up for the task. She submitted the winning designs for the benches and bike racks and was also asked to come up with a sign design based on the findings of a “Design the Sign” public workshop. Her painting of the Peaks of Otter, called “Shape Our Land,” was selected for the bench design, and another one of her drawings of the Peaks was used for the bike rack design.

“So many people in this area love the iconic mountains, so I felt that design was a great fit for a public piece,” Davies says. “I love simple line-work. The lines and sections of the painting could be constructed into a bench several different ways, giving the fabricator more freedom and flexibility.”

To ensure that the design guidelines would call for proper functionality, Zirkle touched base with David Hanowitz, owner of Central Virginia Manufacturing. “I had met Dave in 2018,” Zirkle recalls. “I remember him saying they like to make different things that aren’t [always]industrial. I needed expert advice as we tailored the design guidelines when putting out the call for designs.” 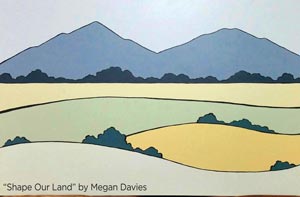 After several businesses put in a bid for the project, Hanowitz’s manufacturing proposal was ultimately selected, and he and his team were excited for the unique challenge.

“I have worked with customers in the past to recreate artworks using our metal fabrication abilities, but this project was unique in the fact that there were several pieces of art to be incorporated into the different builds,” Hanowitz says. “Many times we cannot 100% recreate a drawing or painting to transfer over to cut-and-formed steel due to limitations within the material or machinery used.”

But after what Hanowitz describes as “many hours” designing the benches, they feel like they came as close as they could to making Davies’ painting come to life on a steel canvas. “At the end, we were very pleased with the outcome,” he says.

Although neither Davies nor Hanowitz reside in Bedford, they both feel strong ties to the town and are delighted to play a role in its beautification and advancement. 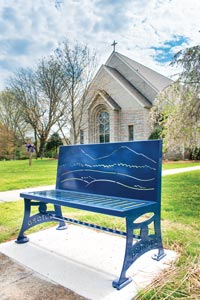 “Whenever I talk to other artists about how and where to get involved, I always stress to plant some artistic roots in Bedford,” says Davies. “The art community in Bedford is more like family and everyone is so supportive of each other. Bedford is my art home.”

“The community will embrace a project like this, especially when members of the community are directly involved with the design work,” Hanowitz notes. “These projects always benefit local companies that are involved as it gives examples of their abilities and can help foster future projects with other local businesses.”

Zirkle hopes this initiative will be the first of many art-focused projects, and community collaborations, in Bedford.

“I hope the benches and racks will encourage people to add more public art of their own and to request that of the town,” she says. “I want visitors to see that we are a creative and welcoming community, and these pieces can help convey that. Maybe one day we can have an ‘Art Walk’ of some kind for people to discover unique pieces and appreciate them. I think art should be a year-round celebration of what Bedford is.”

During the Pandemic…
“Public Works placed these benches while this pandemic was going on. The director and I talked about how important it was for people to see things like this happening, that work on improving the community continues. The bench installation came at the perfect time with people needing to get out safely and to see something new that brightens their day.”
– Mary Zirkle, economic development coordinator in Bedford