When New York natives Andrew and Kim Mather moved to Central Virginia in 2013 to be closer to their adult son and daughter, they had no idea that they were one step closer to fulfilling a 40-year-old dream of owning their own business. On Tuesday, Nov. 9, 2021, they opened the doors of the first New York–style bagel shop in Lynchburg—The Bagel & I. 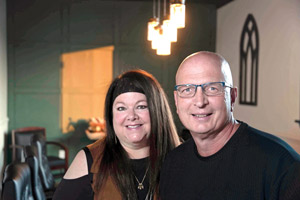 “I think you have lofty dreams in college, and maybe somewhat unrealistic, however that’s okay,” Andrew Mather said. “I’m sixty [years old], so here we are 40 years later, and the dream has come to fruition.”

A few years after moving to Lynchburg, the Mathers spent a six-month period accompanying their youngest son on trips to Brooklyn, N.Y., where he received invasive health treatments. This required the family to stay in the city for a week at a time each month.

It was during one of these trips to New York that the idea for The Bagel & I was born. 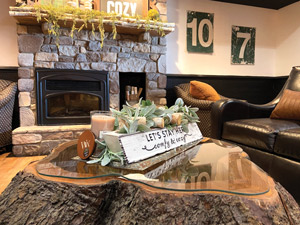 “While [in New York], of course, we ate a lot of bagels,” Andrew Mather said. “I remember so specifically, I [was]on my knees praying and it just [hit me]. The Lord just [gave me the idea]… bagels.”

After several years of planning and brainstorming, the couple put their plan into action in December 2020, when Andrew Mather came across a listing for the building on Timberlake Road that was formerly Country Cookin restaurant. After having his initial offer turned down, he was able reach a lease agreement with the building’s new owners in April 2021 and got right to work on transforming the 5,000-square-foot space into a unique, multi-faceted bagel shop.

The Mathers enjoy the versatility the larger building provides, and their vision was to create a welcoming environment for all ages. The space includes a private conference room, relaxing fireplace room, booths, high-top tables, outdoor seating, a drive-through, and a “bagel process room” where guests can view how a traditional New York–style bagel is crafted. 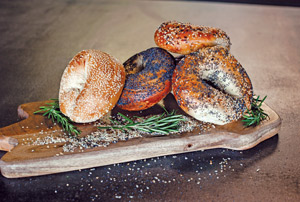 The Bagel and I offers 14 bagel flavors—from everything to French toast to whole wheat.

Also on the menu are breakfast sandwiches and cold and warm lunch sandwich options that are named after parts of town (e.g. “The Timberlake”: an everything bagel with tomato, avocado, bacon, arugula, and red pepper schmear).

Despite having to push back the shop’s opening date due to delays in the shipping of their bagel equipment, the Mathers have remained confident and thankful for their new business.

“For [God] to work things out, He is the Grand Weaver,” Andrew Mather said. “What He did to make this [dream]come to fruition is absolutely amazing. Yet that is confirmation that He is in it. It’s His and not mine.”

The Bagel and I
20584 Timberlake Rd, Lynchburg