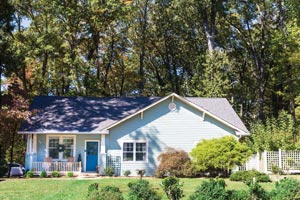 Who among us hasn’t fantasized about escaping to a cozy cottage, complete with a roaring fire and hot cocoa in hand, during the dark days of winter? For Don and Amy Beck, that dream is their daily reality thanks to a move that landed them in a newly renovated Boonsboro home just in time for its 100th birthday.

“I was first attracted to the quirks and charm here. I could imagine how charming it would be, even though it was mid-renovation when we saw it. The fireplace was a favorite feature!” Amy said.

The lovely blue-green cottage, with its custom exterior paint color and large, flat yard, has changed hands many times in its life and, like many homes of its age, has seen many changes over time. More recently, it was inhabited by local artist Kelly Mattox before being bought by renovators who sought to bring the cottage back into full bloom. It was in the middle of these renovations that the centenarian cottage was discovered by the Becks, who were looking to downsize. It took some imagination on their part, however, to see past its current condition. 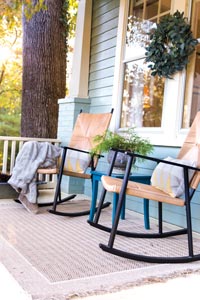 “They had gotten rid of popcorn ceilings, the bathrooms were completely trashed, there was nothing there. So we had to take a chance,” Amy recalled.

The Becks were well-positioned to make the leap. The couple first moved to Lynchburg 27 years ago, raised their family here, and have become well entrenched in the community, with Don as a director for Meriwether Godsey and Amy previously working for years at The Farm Basket. Married 36 years, the couple has renovated other homes and are known to DIY together.

“We are both handy,” Amy said. “We both get out there with the saw and do things. We’ve always done it since we’ve known each other.” 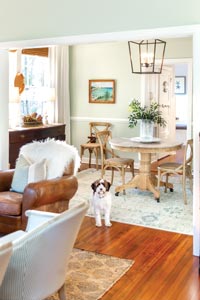 While it was a bit of a relief that much of the major work at the cottage was done by the time they moved in, Don and Amy knew they still had work ahead to make it their own. Amy, a prolific decorator, began an Instagram account (@TheCozyCollectedHome) to document the process as she curated a look she loved.

“I think this is the way I express [art], through the way I put things together,” she explained. “We moved a lot when we were first married, so I was always trying to make something into a home. Always on a budget.”

One of the inspiring elements of Amy’s aesthetic is her talent at mixing curated and thrifted items together. She is unafraid to get her hands dirty to transform an item with good bones.

“I tend to buy a lot of things on Facebook Marketplace, I like to DIY. I do a lot of furniture and make things work,” she said. 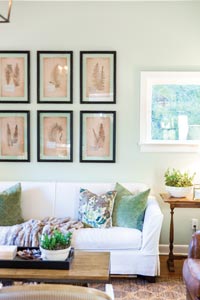 Walking into the home through the deep teal front door is akin to walking into a warm hug. With living space spilling into the dining area and glimpsing into the kitchen, soft beiges, creams, and greens marry with perfectly positioned decor. Layers of textures—leather, wood, throws and pillows—meld together to welcome in visitors. Natural light encases beautifully neutral walls decorated with art, ranging from vintage and store-bought finds, to pieces by family (such as the dining room’s seascape, painted by her grandmother), as well as local artists, including Kelly Mattox.

“We thought it would be cool to have a piece of hers,” Amy said of the large, colorful painting. Also nestled in the dining area is a hutch from Greenfront and a sideboard found years ago at McCraw’s Furniture Company in downtown Lynchburg, which Amy finished with a paint treatment. But it was also this same area that created an interesting challenge and opportunity for Amy to exert her DIY magic.

“Right before we moved, I realized my dining room table was not going to fit in this house. So I sold it on Marketplace, and bought this one, which I recently refinished,” Amy explained of the previously dark wood round table she stripped and sanded down to create the light wood version that rests there now. 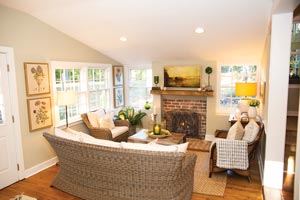 Examples like these of Amy’s eye for detail and ability to take a pre-owned item and give it fresh life are on display all over the home. In the living room, she added locally-made slipcovers to a couch and chairs the couple had owned for 15 years, and topped them with vibrant throw pillows that she likes to swap out seasonally. Side tables were thrifted or sourced on Marketplace to further anchor the space, along with botanical framed art above the sofa, and touches of greens and blues sprinkled in.

That same colorway runs throughout the home, lending a subtle beach vibe in places and paying homage to the fact that the Becks lived in Florida for many years. The nods to the ocean shimmer especially in the kitchen against the white and gray backdrop. A framed blue coral print hangs in the window above the sink while oyster shells lay open in a wooden dish, acting as small makeshift trays for an assortment of nuts. Clean white Vicostone Misterio quartz countertops and unlacquered brass pulls from Rejuvenation add a sparkling finish to the kitchen, which has come a long way from when Don and Amy first laid eyes on it.

“The kitchen was pretty much nothing when we saw it,” Amy said.

“It didn’t have counters, appliances weren’t in, the floor hadn’t been done,” Don added. 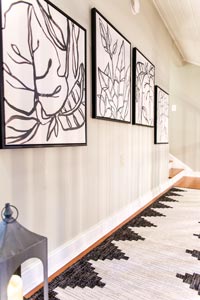 The Becks did encounter the renovation early enough to pick out some of the finishes and, now complete, the kitchen has become one of their favorite gathering spots. A corner built-in banquette is outfitted with bench seat cushions made at Phil’s Upholstery. In the middle of the room, the small kitchen island fits the scale of the space and carries a memorable story.

“It was the microwave table when we first got married, and then it was our laundry table, and I sanded it down because it was a wreck, and it has been perfect,” Amy relayed.

Just off the kitchen is one of the “wow” moments of the home—a second seating area that expands into a vaulted room that exposes the second floor catwalk and stairs. But the den is perhaps the coziest room in the cottage, with its gas logs, a wooden mantle sourced on Etsy, Samsung’s The Frame TV creating the illusion of art above the mantle, and wicker sofa and chairs from Greenfront. The coffee table was a yard sale–find that the Becks painted and cut down to coffee table height. Green hurricane glass from Penny Morrison (UK) on the table and mantle and the green glass vase in the window from The Farm Basket bring in the home’s color palette. A landscape painting by local artist Rosalie Short further elevates the already ideal coffee/reading room.

The vaulted room adjoining the den is no less attractive, with its inherited center table topped with a large vessel and stems from Katrina and Co. at James T. Davis. A lamp from The Farm Basket sits atop a thrifted bar cart, casting light on a pencil and charcoal drawing of a football player, sketched by Amy’s father.

Peering up the open stairwell to the catwalk, art once again steals the show, this time in the form of black and white floral pieces lining the open hallway.

“Funny story, I knew I needed something bold for up there, so I found those at Target and they only had two types. And it was actually my daughter’s idea. She said, ‘What if you turned two upside down?’ So that’s what we did to make it look like four different pieces and it was very inexpensive,” Amy explained. 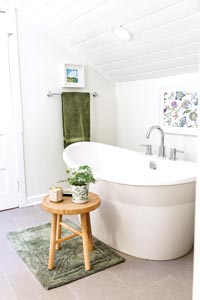 The winding steps with the seagrass runner also lead to the Beck’s bedroom suite. The oversized room with soaring beams, painted natural wood, and skylights naturally gives off a nautical vibe. Their bed recesses into the wall and hearkens back to time the couple spent on their boat when they lived in Florida.

“It’s a nice little nest,” she said of the bed nook.

A balcony off the bedroom overlooks the expansive backyard and brings further light into the already bright space. Just out of the bedroom door and up a couple of quirky stairs is the bathroom, crisp and spacious with basketweave tile floors, a double vanity, standalone tub, and signature notes of green. Flowing out of the bathroom is a bedroom-turned-closet, which houses not only Don’s and Amy’s clothes but also a vanity table they made from their old kitchen table, which they cut in half.

Enchanting as the cottage is, the Becks still have many projects on the docket. They recently redesigned the first floor laundry area and still have plans to renovate the downstairs bathroom. But, as the weather warms, they will first turn their attention outside. 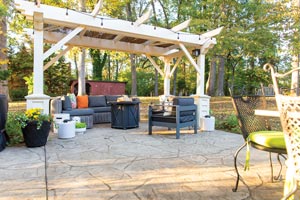 “We downsized the house and doubled the yard,” Don joked, admitting that gardening isn’t their favorite thing. Amy added that with their son’s wedding coming up in June, many out-of-town family and friends will be visiting the home, so their sizeable yard and its landscaping will become the primary focus.

Regardless of the projects still ahead, as the couple heads into their second year in the home, they often look around at the cozy collected home they have created and smile.

“I think my favorite part is the charm of the house, it’s ‘my storybook cottage’ kind of thing,” Amy said. “It’s my dream in that way. I have always loved that kind of look.”

Make a First Impression
The front porch of the Beck’s cottage is small but is big in style. Large lanterns hang above a small bench leading to the front door, a vintage trough houses seasonal decor such as pinecones in winter and pumpkins in the fall, and a garland wreath hangs from the picture window over a pair of rocking chairs. Small and simple—a stunning first impression.

Candles. Lots of them.
Real wax and wicks, battery-operated with lifelike “flames,” in sconces, on tables—it doesn’t matter. Candles and cottages just go together.

Pair “high art” with found and family pieces.
Art truly adds to the “collected” feel of the home, and Amy is unafraid to mix it up. Art that her kids made when they were little folds in with “heirloom” pieces by local and national artists, alongside store-bought and inexpensive prints. The key to unifying certain groupings are affordable frames that Amy painted black.

Form & Function Meets DIY
Amy knows that furniture’s form is often more important than its original function. Scouring Marketplace and yard and estate sales, she looks for pieces with potential that perhaps need to be painted, sanded down, or even cut up a bit to fit the intended space. This allows her to be flexible and not invest a lot in her selections while also making them exactly what she wants.