Larry Vicks picked the first purple eggplant of the season and placed it on top of a basket of green and jalapeño peppers.

The basket was bound for the front desk at Centra’s Alan B. Pearson Regional Cancer Center, where patients can select fresh vegetables to take home after treatments. The gardeners have given away more than 1,000 bags of produce to patients, offering a more holistic approach to healing.

“People can come out here and look at the garden, too,” Vicks said. “If you’re a patient, it’s nice to get a little calmness.”

A gazebo provides a shady spot, even on hot days, where patients can sit and smell the lavender in bloom and see ripening tomatoes. Patients can even look out the second-floor window while receiving treatments to view the colorful vegetables below.

Studies show that patients with views of plants and trees heal more quickly than those looking out on a sea of asphalt and concrete.

The garden is immediately behind Centra’s Healing Garden, which is also a quiet green space for contemplation that was created when the Pearson Cancer Center opened 10 years ago.

The vegetable garden got started three years ago at the suggestion of the Center’s founder, the late Alan B. Pearson. Lots of locals helped with the project, from its design with raised planting beds to the decisions about what to plant.

Linda Papadopoulos uses her 35 years of gardening experience, along with her knowledge as a registered dietitian, to find varieties that are high in anthocyanins, the pigments that give red, purple, and blue plants their rich coloring. In addition to acting as antioxidants and fighting free radicals, anthocyanins may offer anti-inflammatory, anti-viral, and anti-cancer benefits. “We can use nutrition to keep us healthy and help us fight cancer,” she said. 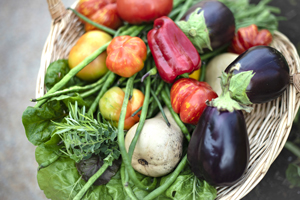 Papadopoulos pointed to a variety of purple cherry tomatoes called indigo blueberries, which are especially rich in anthocyanins, though she admits they are not as tasty as other varieties. She is also researching the best types of carrots and eggplants.

“I am thrilled to have a program like this that I can be part of,” she said. “I don’t know any other cancer center that does this.”

Anita Lowe, community liaison at the Cancer Center, has taken on the garden as a favorite part of her job. “I didn’t know I was going to be out here gardening,” she said. “It’s addictive. … We have a lot of support from the community. That’s what you need to make a garden grow.”

A student from the University of Lynchburg, for example, created a detailed notebook outlining plans for what, where, and when to plant. Students from E.C. Glass and Liberty University have also helped with planting, mulching, and watering. The next project is to get an irrigation system in place.

Volunteers plant spring, summer, and fall crops to ensure fresh vegetables as much of the year as possible. The Center also receives supplemental vegetables from local farmers.

Carol Riggins, managing director of the Cancer Center, said Alan Pearson got the idea for the garden after spending a lot of time at the center observing the events offered, including nutrition talks and cooking demonstrations that highlight the importance of healthy eating during and after treatment. “If you’re going through cancer, nutrition is extremely important,” Riggins said. “We’re trying to show them how to walk the walk.”

Before creating the garden, the Cancer Center also sponsored a farmers market twice a year with the help of Conner Produce, Saunders Brothers, and others. Riggins soon realized fresh produce was very popular. “I could get the most ‘thank yous’ from those things,” she said.

While the produce elicits gratitude, Riggins said she thinks the tranquility and beauty of the garden is equally important. “Mr. Pearson knew that and definitely wanted this vegetable garden to happen,” she said. “We appreciate Mr. Pearson’s vision.” 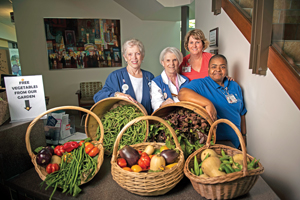 Riggins also extends a huge thanks to the volunteers who keep the garden growing without adding a burden to Centra’s grounds staff.

Like all gardeners, the volunteers have to contend with finicky weather and wildlife that enjoys a tasty snack. In July, groundhogs or rabbits crawled under the deer fence and played havoc with the okra patch, eating nearly every leaf off the plants. To combat the critters, Vicks and Doug Pugh, another faithful volunteer, spread netting across the top of some of the plants to help them recover. Birds also like to pick at the strawberries, blueberries, and tomatoes.

“I don’t like to see it get eaten up,” said Vicks, who started volunteering after his wife Berkey was diagnosed with breast cancer in 2015. She had been volunteering at the Cancer Center before her diagnosis and continues to volunteer to help others through difficult times. While Berkey greets patients inside, Larry is likely to be outside in a wide-brimmed hat. “It’s therapy for me because I like to see things grow,” he said.

Lowe calls the plants eaten by wildlife “sacrifice vegetables.” She notes that they grow the vegetables as organically as possible, and she even learned how to do soil samples. “It’s really for getting out there and forgetting your troubles,” Lowe said of the garden, and it’s worth the sweat when the patients return to say how much they enjoyed a tomato or bag of beets.

The garden is also an allegory for patients battling cancer. “As long as you have a garden, you have hope,” Lowe said.