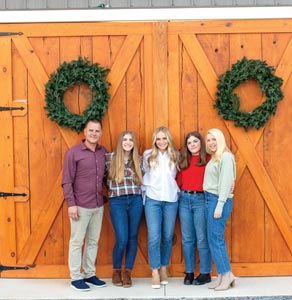 Sometimes, it takes a worldwide pandemic to push you to do the thing you’ve been dreaming about. For Tim and Tonya Pafford, it was the COVID-19 lockdowns of early 2020 that made them realize it was time to stop thinking about building a “barndominium” on the 30 acres they owned in Evington and actually go for it. The result is a peaceful spot in the world that readily welcomes their family and many guests for gatherings year-round, including the holidays.

The Paffords are high school sweethearts and have three daughters, Emory, 19, Avery, 17, and Hadley, 15, and first bought the larger 155-acre farm with friends a few years prior for use as an outdoor playground. The land adjoins part of the Big Otter River so their family would come out and fish, kayak, camp, and explore the property with four-wheelers. But it was a far cry from buildable at first. 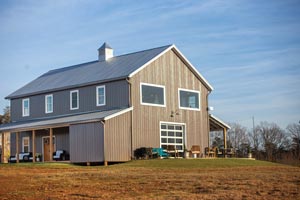 “Someone had clear cut it and sold the timber, so there were no trees, the dirt was all dug up,” Tonya said. “I couldn’t envision anything liveable to be honest, but it had really cool views and river frontage, so we all decided to take the plunge and bought it together and subdivided it.”

The original 1920s farm was named Otter Oaks Farm and, along with lots of clearing, planting, and prepping, the Paffords also re-incorporated their 30 acres and brought back the farm’s original name. Tim drew out plans for what they now call “The Barndo” on a flight from Florida to Virginia, so the general framework was ready when they broke ground in January 2020. Soon however,
the project became a family sanity saver.

All Hands on Deck 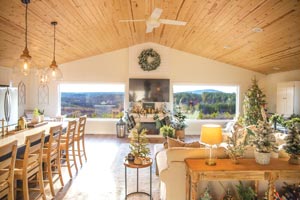 “It became a COVID party of sorts,” Tonya said. “We had wood delivered on the day Tim was told, ‘Don’t come back to work.’ And the girls were told not to come back to school. I’m a nurse so I knew I was going to be going to work, and it would be kind of a war zone. So, we just thought, this is our moment—we are selling our house and building The Barndo.”

In no time, Tim was spending long days at Otter Oaks building the project mostly by himself, with help from the girls and food runs from Tonya. 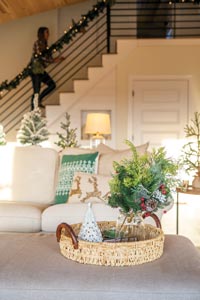 “The kids would work with Tim, but they did have to do homeschooling so they would do their schoolwork and I would bring food and we would have dinner in the construction zone, and it was our way to be together,” Tonya recalled.

Emory, their oldest daughter, is now a pole vaulter at Liberty University but she readily comes home to The Barndo. 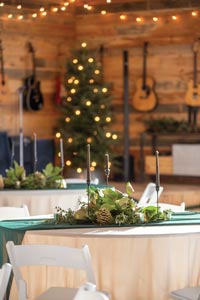 “Helping to build the house is a core memory,” she said.

“Functional was the first key,” Tim said. “Good use of space. This concept was very simplistic, but we wanted to maximize every square inch possible with the simple design.” 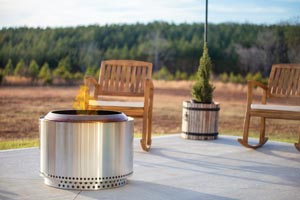 Exterior in, The Barndo strikes a balance between rustic-industrial and warm farmhouse style. The home’s roof and metal siding are exposed galvanized metal, installed by Karlin’s Construction of Lynchburg, in a charcoal color on the house and left an unpainted natural metal on the roof. The home’s cupola was handmade in Amish country, Pennsylvania, and driven down on a truck. The oversized barn doors, perhaps The Barndo’s crowning feature, were crafted by Tim using oak harvested on a neighbor’s property.

“It actually worked out better than I thought it would,” Tim said. “It’s cool because it’s actually wood from right here. It has imperfections and they are unique planks of wood. It came together.” 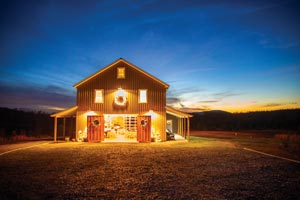 Start to finish, the house build took 11 months of work from January to November 2020, moving the family in just in time for their first holiday season there.

“The first snow here was beautiful, it looked like a Hallmark card,” Tonya recalled. “It was such a relief when all of us were finally here!”

Tim added, “There’s something about crawling into your bed two minutes after unplugging your tools versus packing everything up and driving home at 3 in the morning.”

Living Large in a Smaller Space 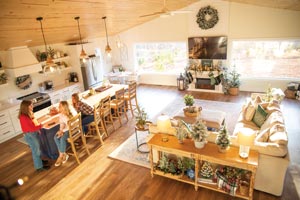 While The Barndo has been a welcome change of scenery for the family, it did get some getting used to after moving from a larger home in Forest.

“We moved from a little over 4,000 square feet, so 1,600 square feet felt small to us at first, but we quickly learned to minimize and live more streamlined. It’s bigger than you think and there’s a lot more space than you think,” Tonya said. 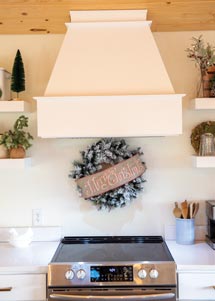 The open layout flows from sitting area to dining space to kitchen, each point accommodating sweeping views of the outdoors.

“Tonya wanted the big windows, so we wrestled them up here. It took a couple of engineering minds to figure out how to crank them up, but the whole layout was based around the view,” Tim said.

The room’s height also bolsters the larger sense of space, reaching 14 feet at its peak. The family worked together to install the tongue-in-groove Southern pine on the ceiling, and Tim sealed it using a matte, non-yellowing poly from Benjamin Moore. 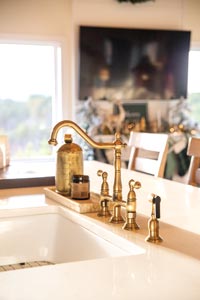 With the open room putting the kitchen on full display, Tonya needed it to perform well in both form and function. She chose a long navy island with quartz countertops and plenty of seating, open shelving to keep the visual space light, and even managed to squeeze in a pantry closet. The kitchen is now a place Tonya and her daughters often find themselves congregating.

“I love the big open space. You can have a lot of people in here at one time and it makes it feel super homey,” Emory said.

As they were thoughtfully designing the layout, the family made trade-offs to accommodate their lifestyle. Smaller bedroom sizes meant more living space for all. A shared room for their oldest and youngest daughters hosts a queen size bed with a bunk above. Upstairs, a loft bedroom with a vaulted wood ceiling was designed for their middle child, Avery. 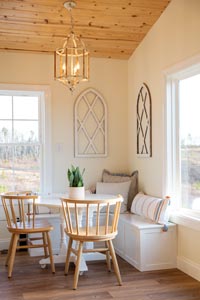 “I like that it is my own room that I don’t have to share with anyone. And I like the built-in bookshelves a lot, and the ceiling,” she said of her cozy bedroom.

Tim and Tonya also added a separate drop zone on the first-floor entry to corral all the family’s belongings as they come and go. Five IKEA bookshelves were reconfigured together to make cubbies, an old barn light was rewired for the space, and a piece of wood from a 1920s home in Rivermont was hung as a coat rack. A door from the drop zone leads into the downstairs space of The Barndo, revealing perhaps its biggest asset—a large entertaining area.

Rocking Around the Christmas Trees 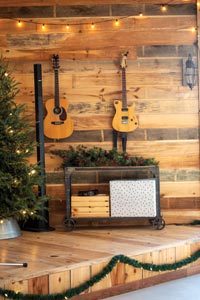 What began as raw concrete floors and sheetrock on the first floor quickly transformed as the family anticipated holding Emory’s graduation party in May 2021, their first big get-together in the party space. Now, channel rustic pine sourced from Blue Ridge Lumber in Fishersville, VA, covers the walls, a platform stage invites musically minded guests to pick up a guitar or sing karaoke, and circle tables decorated in holiday greenery invite all to sit back and enjoy the season’s gatherings. A roll-up glass garage door in the back lets natural light in and creates a seamless transition to the outdoors.

“We just want a big, fun family space,” Tonya said. “The house was super important to us when we first came out here, but we learned that we don’t need nearly as much as we thought. And we live so much on the outside here.”

Eventually, Tim and Tonya would like to build a larger main house and keep The Barndo as a house for the girls to stay as they all go to college, a place for guests, an Airbnb, or maybe even a future pool house.

“We want a place that our kids always want to come back to,” Tonya explained.

Home for the Holidays 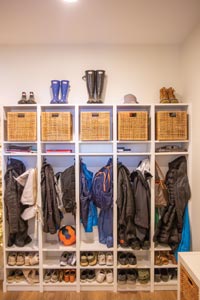 Reflecting back this holiday season, the family can see how much the project created a calmer mindset for them when so much was uncertain.

“It kept us from getting caught up in what was happening. We didn’t have television,” Tonya said. “So being here, we weren’t afraid, we were all together, and if someone needed somewhere to get away, we had the ability to offer a wide open space and take walks when you couldn’t do that. It meant a lot to have a place to escape.” 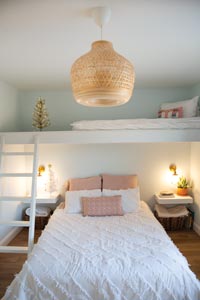 It’s also not lost on them that they were able to transform their slice of land into a place of tranquility; one they can now readily offer to others, simply by opening their big barn doors.

“Both of us are very appreciative of this place,” Tonya said, “and how cool it is to look out those windows every day and see nothing but creation.”