Humans have been living in the foothills of the Blue Ridge Mountains for thousands of years, yet most of the stories we know about our local heritage tend to begin in the 18th century when a teenager named John Lynch started a small ferry company, helping travelers from local colonies cross the James River.

But what did life look like before Lynchburg grew into a city?

If you were standing at the top of Lynchburg’s Monument Terrace way back then, what would you see? What would you smell? Who would be there? And, most importantly, what would you eat? This story is an imaginary culinary tour of the place we call home.

Meet the Monacans
Picture multiple rows of corn growing as far as the eye could see in the fertile ground on the banks of the James River over by Percival’s Island, almost like a wide fence. Not the large sweet corn variety we are used to today, but a smaller more grass-like ancestor called maize. Vines of beans may have been climbing up the corn stalks and squash plants were growing on the riverside, protected by the wall of corn.

The long, winding garden did not need a fence. Children armed with pebbles would keep rabbits and squirrels away, and if a hungry deer would be foolish enough to approach the crops, it may not have lived long enough to take a bite. The deadly arrow from one of our area’s first permanent inhabitants, the Monacans, would have killed it instantly.

In 1605 when British explorer Captain John Smith surveyed our region for the first map of Virginia, he identified five Monacan villages in the area between Lynchburg and Natural Bridge. As many as 25,000 members of the Monacan tribe called the area home at that time. Sadly, their numbers were decimated when the British settlers arrived, mostly from disease they brought with them. The lands of the Monacans were taken over during those years as well.

Thanks to the Monacans’ skills in making clay pots and building sophisticated woodstoves, you would be smelling a bubbling stew of squash, corn and beans if you lived in the area back then. A bone from a deer helps make a tasty stock, but the meat is from a freshly caught rabbit. The rest of the deer is hanging in the smokehouse for preservation. The stew will be served with a bread made from acorn flour mixed with a little wood ash from the fire—a natural form of baking soda.

West African Influences
Fast forward to the 1730s and the view has changed dramatically. The Monacan lands in the Lynchburg region have been taken over by European (mostly British) settlers, and there are green rows of tobacco growing as far as the eye can see. Stately plantation homes are earning a reputation for their “Southern Hospitality.”

The food you are smelling is being prepared by the plantation’s cook, typically an enslaved black woman who survived the long journey in chains from West Africa. She is literally bound to the fire as she prepares a sweet potato and peanut soup with corn bread in the plantation kitchen. Kitchens often had a dirt floor and an open-flame hearth—and housed the cook’s living quarters.

The first slaves are said to have been brought to Jamestown by the British from West Africa in 1619, although the industrial-scale slave trade came decades later to support plantation farms. We don’t know exactly when the first enslaved Africans were brought to Lynchburg, but considering there was direct access to Jamestown via the James River, they likely came early in the 17th century.

Chef and food historian Michael Twitty in his book The Cooking Gene explains that, “The American plantation wasn’t exactly the quaint village community you saw described in your history textbook. It was a labor camp system for exiled prisoners of war and victims of kidnapping.”

The African cooks brought both skill and taste to America. Black-eyed peas, okra, peanuts, and sweet potatoes were all new flavors they integrated into the fare of European favorites, essentially giving birth to what we today call Southern cooking.

Our Founding Foodie
Founding father Thomas Jefferson may have been known as the “founding foodie” because of his passion for fine foods and drink, but at his retreat home on the Poplar Forest plantation just outside of Lynchburg, the fare was surprisingly simple. When he famously stated that “Lynchburg is the most interesting place in the state,” he probably was not talking about the culinary scene.

Locally grown vegetables with a side of chicken was often served at 3 p.m. as the main meal of the day at Poplar Forest. And although the kitchen garden was the size of a football field, Jefferson complained in letters that his beloved peas didn’t grow well there and all they had was “spinach and scrubby lettuce,” as he put it.
Martha Jefferson inherited the plantation we know as Poplar Forest from her father, and Thomas himself started visiting Lynchburg after his presidential term had ended in 1809. It was much larger than the site we know today, and Jefferson added even more land over time. At one point this tobacco farm stretched all the way to today’s Jefferson Forest High School, or 5,600 acres to be exact.

Jefferson did not have an ice house at Poplar Forest, so his enslaved cook, Hannah, was not able to make his favorite treat, which was ice cream. However, archeologists have found pieces of what appears to be a serving glass for wine jelly at Poplar Forest, another favorite of Jefferson’s. What is wine jelly, you ask? Well, it’s similar in texture to what we call Jell-O today, but it’s made with fortified wine and milk.

Step back in time and taste some of our Virginia heritage recipes, adapted for our modern palates! 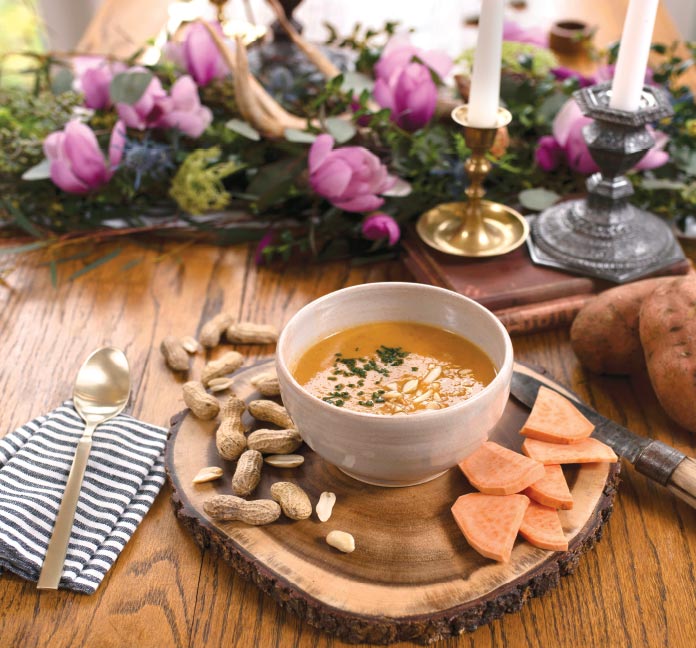 APPETIZER
West African Peanut & Sweet Potato Soup
This is a family-friendly yet flavorful soup that’s easy to make. For the best result, look for sweet potatoes with red flesh. The peanutty goodness comes from peanut butter and for optimal flavor, go with either fresh ground or “natural” creamy peanut butter.
SERVINGS: 4 to 6

DIRECTIONS:
In a large saucepan, melt the butter over medium heat. Add the minced onion, brown sugar and salt and cook until the onion is starting to turn brown, about
5-6 minutes. Add the garlic, coriander and cayenne and cook for about 30 seconds.

Add the chicken broth, water, peanut butter and sweet potatoes. Bring to a boil over high heat, then cover and turn to low and let cook for 20 minutes or until the sweet potatoes are soft.

Pour the soup into a food processor and blend slowly and carefully until smooth. Return to the saucepan. Ladle into bowls and serve with cilantro and a splash of olive oil.

MAIN COURSE
Braised Rabbit with Mushrooms
In addition to being farmers, the Monacans knew how to hunt and live off the land. Deer was the most common menu item, but smaller game such as squirrel and rabbit was also common and easy to trap. If you are new to cooking rabbit, this is an easy way to get started. Much like chicken, rabbit doesn’t have a very strong flavor so the key to a good rabbit recipe is to pair it with other flavorful ingredients, in this case the mushrooms and roasted garlic.

Rabbit is available from the Forest Farmers Market (look for Rainbow’s End Farm) as well as from Fresh Market in Lynchburg. However, if you are not in the mood for rabbit, regular chicken (dark meat) works well as a substitute in this recipe.
SERVINGS: 4

DIRECTIONS:
Preheat oven to 375 degrees. Cut up the rabbit and season pieces liberally with salt and pepper. Let sit at room temperature for 30 minutes. Be sure to use all parts of the rabbit in the stew; you can fish out ribs and spine before serving but keeping them in during braising since they add valuable flavor.

Slice the top third off the two garlic heads and drizzle with olive oil.

Wrap heads loosely with aluminum foil and bake for about 45 minutes, or until cloves are soft and brown. Set aside to cool.

Add the oil and 2 tablespoons of the butter to a large Dutch oven or saucepan and brown the rabbit pieces on all sides, a few at a time. Take your time to develop proper browning because this is a key step to build flavor in the dish. Remove the rabbit from the pot.

Sautee the onions until translucent. Add the mushrooms and cook until they have released most of their water, about 5-7 minutes. Add the wine and let cook for 2 minutes while scraping the bottom of the pot. Squeeze the soft roasted garlic cloves into the pot and stir to dissolve.

Add back the rabbit and add thyme, parsnip, water and stock to the pot and simmer for 90 minutes, or until the meat is starting to fall off the bone.

Time to thicken the sauce. Carefully fish out all of the rabbit. In a small bowl, melt 2 tablespoons of butter and mix with 2 tablespoons of all-purpose flour. Add the flour paste to the braising liquid and cook for 3-4 minutes over medium heat until the sauce thickens. Add back the rabbit.

Serve on its own or with a side of rice. Sprinkle some chopped parsley on top for garnish and enjoy! 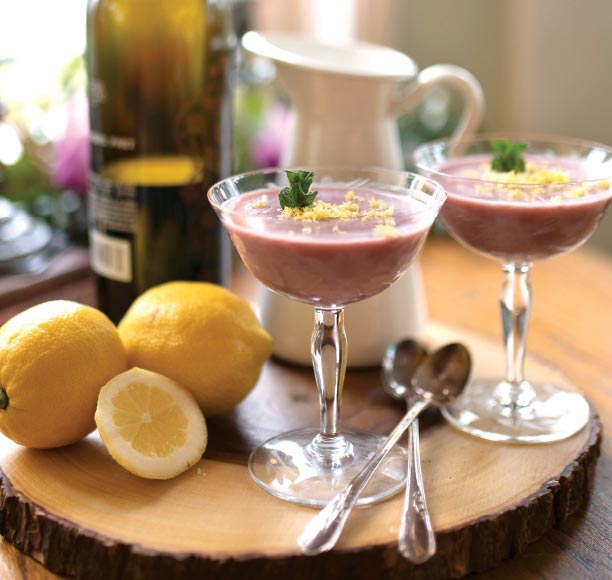 DESSERT
Thomas Jefferson’s Wine Jell-O
This is a modern adaptation of an old recipe for wine jelly, attributed to Thomas Jefferson. It’s a refreshing dessert with a pungent wine flavor and a small serving goes a long way. Keep in mind that since the fortified wine is not boiled, the alcohol is still there—so eat responsibly! Worth noting: This recipe calls for regular gelatin packets from the grocery store, but Jefferson’s cook actually used the hooves from a calf and boiled them to extract the natural gelatin for this dessert.
SERVES: 4

DIRECTIONS:
Soak the gelatin in the water and let sit for 3 minutes. Add the milk to a bowl with a pouring spout, then whisk the gelatin, sugar and salt into the milk until completely dissolved. Add the lemon juice to the wine and then whisk the wine mixture into the milk mixture.
Pour into individual serving glasses, cover with plastic wrap and refrigerate until firm, about 2-3 hours or overnight. Grate a little lemon zest on top and serve!

SPECIAL THANKS: Thank you to the following for their help with this feature: Vicky Ferguson, Sally Latimer and Jennifer Austin from the Monacan Indian Nation; the Stocker family of Rainbow’s End Farm; Dr. Kelley Fanto Deetz, author of Bound to the Fire: How Virginia’s Enslaved Cooks Helped Invent American Cuisine; and Gail Pond, manager of collections at Thomas Jefferson’s Poplar Forest.