Mother and Daughter Homes Span Design Spectrum Lisa Richards and Michele Fredericks both love design. One might say it’s in their genes. Mother and daughter

Lisa Richards and Michele Fredericks both love design. One might say it’s in their genes. Mother and daughter share the same bright blue eyes that light up with mutual passion when discussing a home’s form and function. Their individual styles, however, play out in unique fashion in each of their Boonsboro homes. Lisa is an artist who appreciates traditional architecture, French furniture, and lush gardens. Michele is an architectural designer and gravitates toward what she describes as “warm modern” design.

They invited Lynchburg Living into their homes to talk about their distinct approaches to home design. 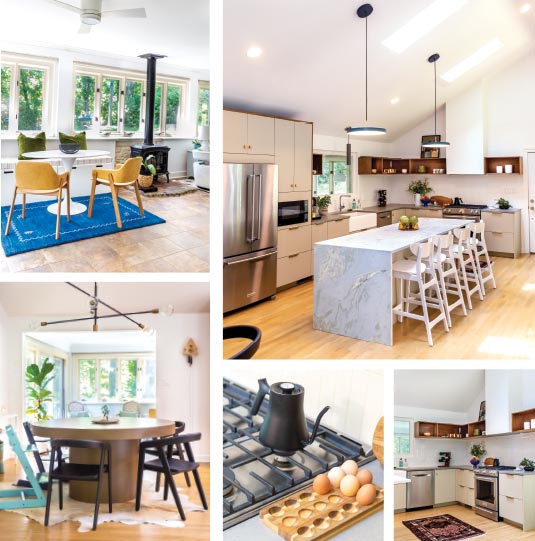 Michele’s Home: “Making Mid-Century Modern”
It was not initially the kind of home Michele thought she would buy. As a “never-Split-Level” kind of girl, she was surprised to find herself attracted to the 1958 split four-level home on a large swatch of land just a few miles from her parents’ home. Still, Michele had confidence she could transform the ho-hum house into a light-filled modern retreat for herself, her husband Jonathan, and their two sons.

The one challenge? “We were on a tight budget for all of our renovations, just the two of us quitting our jobs, not having new jobs, and moving from one country to the next,” Michele said.

Before landing back in Lynchburg, Jonathan’s job took them to such far off places as Germany and Hawaii, where they picked up some valuable aesthetic preferences. Topping the list of their renovation desires: opening up the floor plan and the ceiling, overhauling the kitchen and bath spaces, and adding more natural light throughout.

Though Michele designs project schematics for clients every day in her role at the architecture firm Atelier 11, she knew she could use some reinforcements to make faster decisions for her own home. Enter Bryn Namavari, Michele’s friend from grad school and a designer for the company CB2 in California. The two put their heads together to check the boxes the family wanted. Once the floor plan was created, they partnered with contractor John Joyer of Driven Builders and job super Mike Wright to bring their vision to life.

The duo’s decisions paid off. Walking into the home today, what was once a walled apart and dark layout now soars high with vaulted ceilings and warm white walls. Light pours in through large, drape-free windows and skylights in the kitchen. Pendant lights by AllModern glint off the large Quartzite slab from Roanoke Granite atop the kitchen island. IKEA cabinets with custom fronts from Semihandmade further modernize without being stark. Carefully selected pieces from antique shops, former home locations, and Michele’s lineage adorn the home.

“A lot of the Asian influences are things from my grandmother because my grandfather was in the Navy and they lived in Okinawa. So that is her original silk painting [hanging in the entry] from the ’50s in the original frame, so I started with that,” Michele said. 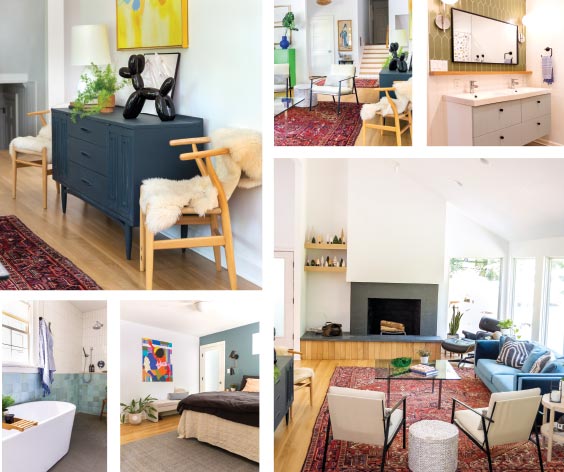 Adjoining the fireplace, with its soapstone hearth and surround from a quarry in Schuyler, VA, are two shelves that host Michele’s one and only true collection, an assortment of wooden trees handmade in the black forest in Germany.

“When I found those—I don’t collect things, but that became an obsession for me because I really like the form of those and how simple they are so now I have a little typology going on,” she explained.

Once the main floor living space renovation plans were complete, Michele turned her attention to the home’s three bathrooms and master bedroom. Tight on money and space, she had to get creative, knocking out hall closets to steal extra space for the bathrooms. In the master bedroom, the problem was too much space, so Michele subtracted some square footage to create a walk-in closet. In the bathrooms, she once again sourced IKEA for vanities with Semihandmade custom fronts. Smaller splurges in the master bath came in the form of an acrylic soaking tub and Cloe Baby Blue tile from Bedrosians Tile surrounding the integrated shower-tub area.

The dust has now settled on the 1.5 years of renovations at the Fredericks’ home and what remains is an airy and eclectic mix of old and new, calming and colorful—exactly as Michele planned it.

“I love an unexpected pop of color,” she said. “I do white walls everywhere because I love color but I don’t love color on the walls. So I want my weird, found, and very bright objects to speak for themselves.” 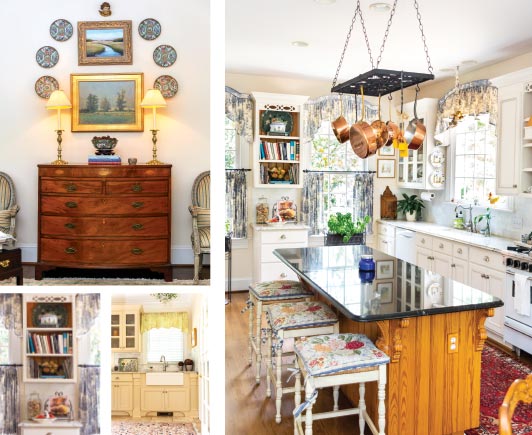 Lisa’s Home: Stylish Symmetry with Gardens Galore
When Lisa and her husband, Jim, decided to finally build their stately brick home in 1995, it had been a long time coming. Lisa, a studio artist whose work ranges from pencil sketching and portraits to oil paintings and watercolors, points to a self-portrait she painted at that time of a 33-year-old version of herself with a certain,
shall we say, “expression” on her face.

“The look I have in that portrait is, ‘If you don’t build me this house soon, I’m selling the property’,” she laughed, recalling that the couple first bought the land and paid it off over six years before they started their new build.

Today the telling self-portrait hangs in Lisa’s art studio inside her quarter-century-old home that has seen a lot of life and expansion over the years. Lisa chose to model her home after the George Wythe house in Colonial Williamsburg, a timeless classic she knew would age beautifully over the years. Michele was just 11 when she and her sister, Laura, picked their bedrooms in the family’s home.

In the time that has passed, Lisa has thoughtfully filled the home with a mixture of antiques, finds from markets in places such as Atlanta, Charlottesville, and France, and an abundance of art. The home’s art collection includes portraits of Michele and her sister as children, “Covid portraits” Lisa painted of her three grandchildren, and a framed still life that was Michele’s first true piece of art at 16, which won an award at the Lynchburg Art Festival. It’s items like these, infused with meaning, that comprise much of what fills the home today.

“I have collected things over the years, over time. Everything has a memory,” Lisa said.

In the living room, for example, six patterned plates hang on the wall, a gift from a close friend who passed away in 1999 from breast cancer. As Lisa carefully collected items over time, her home watched her kids grow up and have children of their own, itself remaining a constant place of gathering for family and friends around the kitchen island.

“I have memories of sitting here sewing Halloween costumes with a day’s notice. And all the family dinners, and making curtains,” Lisa said. “Everything happened here in the kitchen; all of life happened here.”

While the kitchen, with its warm white cabinets, blue toile curtains, double gas range, and hanging copper pans, has not changed much over the years, Lisa did decide to swap out the backsplash and countertops. A slab of granite with beveled edges from Rockfab now adorns that well-loved kitchen island. Off the kitchen, a laundry room was added with creamy cabinets and a place to wash the Richards’ two Yorkies. 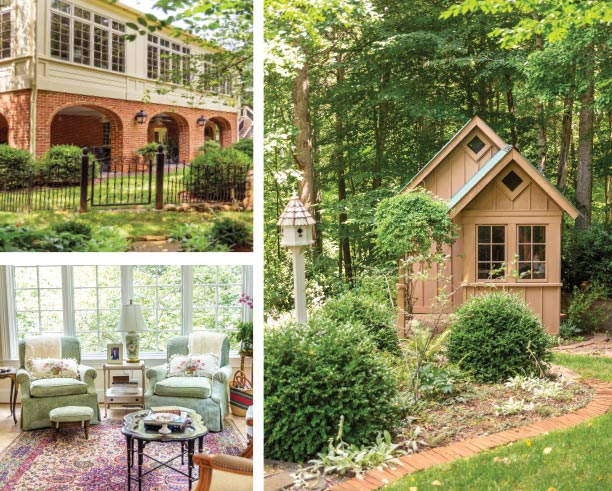 Another addition off the back of the house came in the form of an oversized sunroom, filled with Parisian-style pieces and offering the feel of a tree house with wall-to-wall windows surrounded by greenery.

“My main goal [with the sun room addition] was to see outside,” Lisa explained. “I wanted everything low, everything subtle, because I’m an avid gardener so our big thing is the gardens and the outdoors.”

Indeed, the yard at the Richards’ house is something to behold. From the large Magnolia tree in the front yard and the newly planted Camellias in the back beds to the quaint potting shed overlooking the lush landscape, it’s little wonder why Lisa’s home was chosen to be on the 2022 Lynchburg Garden Tour. She is self-taught as a gardener, and the grounds of her home are now a designated habitat, which means pesticide-free growing, and also contain several bee houses.

“I’m really into my bees,” Lisa said. “Lynchburg is now a ‘Bee City’ and our Lynchburg Garden Club and Hillside Garden Club are working together to promote this.”

From entry to exit at both Lisa’s and Michele’s homes, each provides a serene space to let daily life with family unfold, filled with equal parts practicality and an effusive creative spark. Like mother. Like daughter. 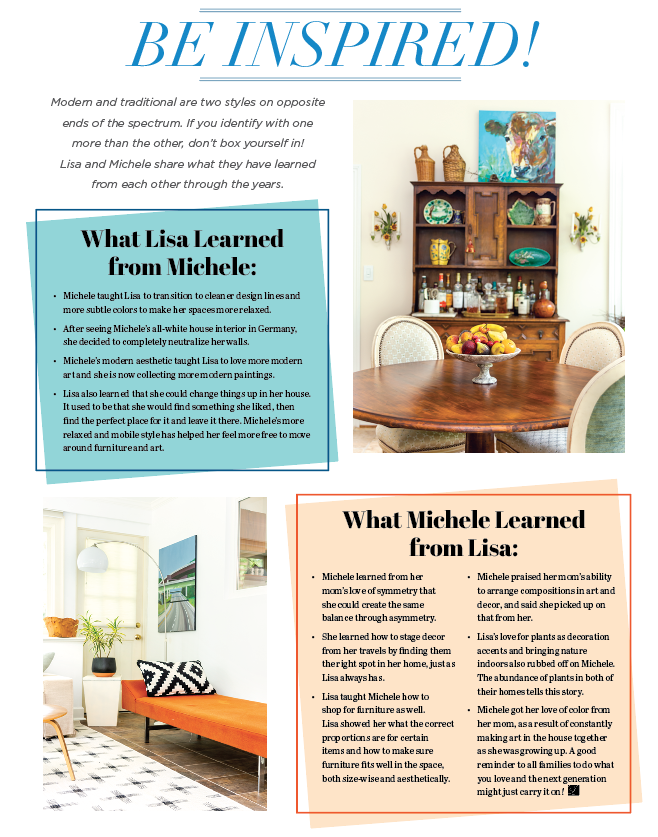