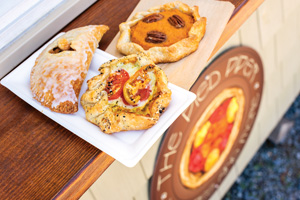 When Linda Hall saw a small mobile building on Facebook Marketplace, she knew she had to buy it.

Hall, along with her Love Is In The Air business partner Mary Love, had wanted to start a food truck business, especially since the pandemic had slowed down weddings and events. But the two women weren’t sure what to sell. All they knew was that they wanted something unique that set them apart.

And that’s how The Pied Piper was born.

Since opening in June, the business has been a hit. Located on Route 221 in the Rookie’s parking lot next to Aylor’s Farm and Garden, people have been lining up to grab one of Hall and Love’s hand pies.

“When we first opened, I was optimistic that we might sell 50 pies a day,” Hall said. “On the first day we were open I made 250 pies for the day, and we sold 88 pies 20 minutes after opening.”

Pies had always been a hit for Hall and Love at events, especially their signature Rustic Tomato.

“I had never had one until a few years ago, when my neighbor who is Italian brought one over to me, and I was like, ‘Oh this is the best thing ever’,” Hall said.

Pie enthusiasts can find the Rustic Tomato alongside a rotating menu that ranges from traditional flavors with a twist such as French Apple and Peach Bourbon to more experimental flavors such as the Reuben, Green Chile Chicken, and Jammin’ Bacon Cheeseburger.

Hall said they try to introduce new flavors each week while still keeping some favorites around.

“We want to keep everything fresh, new, and interesting,” she said. “But many are [flavors]I’ve baked all my life.”

Both Hall and Love have been flabbergasted by the response thanks to word of mouth and social media. Now, to keep up with demand, they’ve added a mobile kitchen to the lot where they can bake their pies right on the property, instead of in their catering kitchen just down the road. As weddings begin to pick up again, this will make their lives so much easier.

“We knew the pies were delicious, but you don’t know what the response is going to be,” Hall said. “It has been challenging, but we’ve also had people buy $70 worth of pies.”