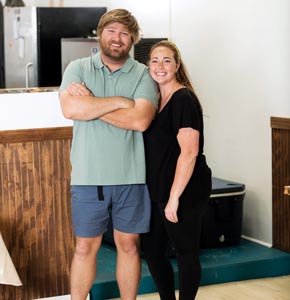 When Oliver Russell left his family’s third-generation shipyard behind in early 2020 to move to Lynchburg, he knew parting with the life he knew along the Carolina coast would be tough.

But as the owner of the thriving Marsh Roots Seafood Company reflects 18 months later: “Sometimes you have to take a leap of faith.”

Getting Hooked on LYH
Oliver’s leap of faith to the Hill City was Claire Lockman, his girlfriend, who had already moved to the area to attend Liberty University College of Osteopathic Medicine. After ten years running the family shipyard and doing charter fishing in Morehead City, N.C., he made the “difficult decision” to relocate.

About six weeks into his new life, Oliver got the sign he needed for his next career: The couple couldn’t find any tuna steaks to make their traditional Valentine’s Day meal at home.

“Within a week, Oliver had formulated this plan to start the company,” Claire said. “He told me, ‘I’m going to the beach to get a load of seafood to sell at the market this Saturday.’”

“I called the market and they were so excited and said, ‘We have been looking for a seafood market for forever,’” Oliver added. 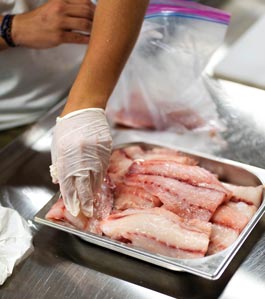 Oliver networked with some of the fisherman he knew near his hometown and made the drive down to pick up his first load. That first weekend, Oliver sold everything he had brought back: 100 pounds of shrimp and 20 pounds of tuna. He sold out the next weekend, too.

Then—the pandemic. The Lynchburg Community Market closed down, and Oliver was left wondering what was next for his brand new venture.

“This is where it turns into story about how great Lynchburg was. Oliver had lived in Lynchburg all of a month, was in business for one week, before we had to take everything online with maybe 100 followers. But people were asking, ‘How can we support you guys?’” Claire said.

“The community really rallied around what we were doing very heavily,” Oliver added.

Marsh Roots Seafood Company continued to gather faithful customers at the Lynchburg Community Market throughout the year and even added an outpost location in Forest, where they sell seafood in the parking lot of T.Y. Realty every Friday. 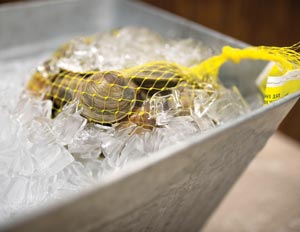 From the Dock to the Dinner Table
As CEO and founder of Marsh Roots, Oliver puts in a good amount of windshield time to make sure he is stocked for sales in Lynchburg and Forest.

“I drive down every Wednesday and go straight to the marina or to some fish houses I know, from friends and from being in the charting industry,” he said.

Which means customers can find out from Oliver exactly where their seafood came from—and when it was caught.

“I know most of the people I do business with on a first-name basis,” he said. “They will text me and say, ‘Hey I’m going fishing tomorrow. You want anything?’”

He says shrimp, scallops and soft shell crabs are the most popular items they sell to Central Virginia customers. They also have had a lot of success with their pre-made items, such as a shrimp dip, shrimp salad, and crab cakes.

“It’s really cool to share recipes that we would make at home,” he said. “It’s cool to mass produce them so everyone can enjoy.” 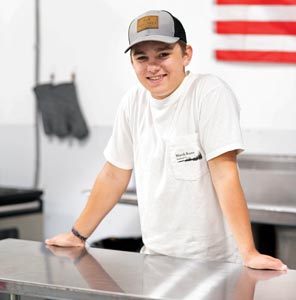 Seafood Stereotypes
Aside from simply selling fresh fish, Oliver is also passionate about educating this community about seafood—and addressing some misconceptions, including:

I stay away from seafood because it doesn’t have long shelf life.
Oliver says some customers think they have to eat seafood quickly, which may deter people who buy in bulk and meal plan for the week ahead.

“Ours is so fresh it will last three or four days in the fridge. If you come on Saturday you can still eat it Wednesday,” Oliver explained, adding that while fresh seafood is best, you can always freeze fish or shrimp to enjoy later if your plans change.

My favorite seafood is probably available whenever I want it.
“There is a modern westernized American mentality. ‘Let’s go to Sam’s Club and get a tomato in the middle of winter.’ Same thing with seafood. We are going to have fish available when they are available,” Oliver said.

Offerings will change throughout the year, so customers who want fresh seafood, not farmed, have to learn to eat what’s in season. This is a good thing because it leads to customers trying new things, instead of just sticking with their “favorite” fish. 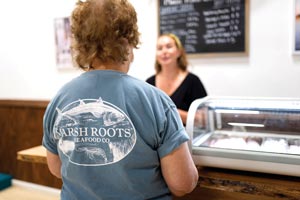 According to Oliver, our current season (July/August) is the peak time for pretty much everything in the world of seafood—from tuna to mahi to Spanish Mackerel.

Seafood is intimidating; it’s hard to cook!
“We want to make eating seafood less of a scary thing for people who didn’t grow up around it, because it’s so good for you,” said Claire.

Oliver says seafood is actually “super easy” to cook: “Just throw it into the pan and add butter and spices.”

The “hard” part may be that seafood doesn’t need to cook for very long—meaning you can’t put it in a pan and forget about it. Most fish, scallops and shrimp only cook for a few minutes on each side, he explained.

Oliver loves being able to talk to customers one-on-one about how to prepare and cook their seafood. But what he treasures even more than those conversations are the follow-up reports from local home kitchens.

“People are sending us photos all of the time of what they are making,” Claire said. “It’s so neat to know we are making average weeknight meals so much better.”

Oliver and Claire share a couple of their favorite recipes for you to try HERE!