As the 75th anniversary of D-Day approaches, artifacts shed light on June 6, 1944

John Long ran a bit late to an interview about the D-Day artifacts he curates because he got a last-minute invitation to lunch with a World War II veteran. 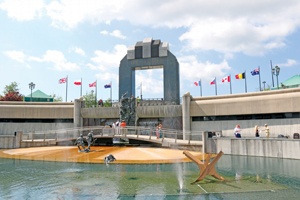 Those are invitations you never turn down. While his lunch partner, Bobbie Johnson, served in the Pacific, Johnson knew a lot of the Bedford Boys—the 19 young men who died on D-Day on France’s shore. They represent the highest per-capita loss in the June 6, 1944 landing, which prompted the building of the National D-Day Memorial in this small Virginia town. In 1944, Bedford’s population was about 3,200. Another four soldiers from Bedford died later in the Normandy campaign. Still others were killed or wounded during the war. “Bedford lost so many men,” Johnson said.

A native of Bedford, Johnson was a crew member on B-29s, the top bombers of the day. He flew on reconnaissance missions and helped bring back B-29s as the war wound down. Johnson’s flight helmet and oxygen mask are among the thousands of artifacts that Long has cataloged and stored in the cramped basement of the National D-Day Memorial Foundation’s administration building. Johnson, who turns 93 in April, says it’s important to study history. “Lest we forget, we may have to repeat it,” he said. He has also donated books and other memorabilia to the memorial.

Long, director of education for the memorial, searched through what seems like chaos to find an artifact to share. He readily selected a box with a few possessions of Jimmy Foster, a veteran from Waynesboro, who died shortly after landing on Omaha Beach. His watch stopped at 8:25, and Long surmises that was the time of his death.

Time is now winding down for those who survived. Indeed, all of the surviving Bedford Boys have passed. As the number of living World War II veterans dwindles, the race to preserve individual stories is intensifying. Long feels the pressure every day as he wades through piles of donations to the D-Day Memorial.

“With the World War II generation passing on, we are getting things from kids, grandkids, and even great-grandkids,” he noted. One recent single donation included 200 items that must now be crammed into boxes in a space that is already overflowing.

The long-range goal is a large education facility/museum to display these relics. In the short-term, the D-Day Foundation is opening a Quonset hut this spring to display a few items. It will replace the old Army tents that have been used at the memorial for education programs for local students and visitors.

Long said they cannot accept all donations, but if an item is related to D-Day, they are keen to have it. Other unusual or rare items from World War II are also welcome, but what they want most are items with stories. 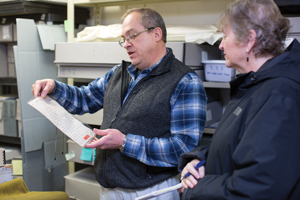 The next artifact he pulls out is a Gold Star banner, given to grieving parents to hang in their homes. This banner belonged to the family of Daniel Paul Womack, who grew up on Walnut Street in Lynchburg. Like the Bedford Boys, Womack was a member of the National Guard’s 29th Division, 116th Infantry Regiment, though he was in Company B, while the Bedford Boys were in Company A. Womack, too, was killed in the landing, and his remains were buried in the Normandy American Cemetery. A French family adopted his grave, a common practice in France, and put flowers on it every June 6.

Although the Bedford Boys are the reason the memorial is in Bedford, there are relatively few artifacts from those 19 men. Among the most poignant is a pocket-sized New Testament belonging to John Schenk. The bible, which was a gift from his mother, was found on a beach in France. Schenk’s wife, Ivylynn, later donated the bible, along with the last letter she wrote—but never mailed—to her husband. The morning after she wrote it, the dreaded telegram arrived.

That telegram was delivered too many times throughout the nation after D-Day, but the losses in Bedford were disproportionately staggering. The Hoback family lost not one, but two sons, on June 6, 1944. Slaughter was determined that the nation understand the extreme sacrifice from this one community. Before he died in 2012, he also contributed one of the rarest items in the collection.

His “Order of the Day,” the official document from President Dwight D. Eisenhower, outlined the D-Day landing to the troops going in. “You are about to embark upon the Great Crusade, toward which we have striven these many months,” the order begins. “The eyes of the world are upon you. The hopes and prayers of liberty-loving people everywhere march with you.”

Slaughter had 75 of his fellow soldiers sign his Order of the Day, which was folded and taped from much handling. Of those 75, 11 died within an hour of landing and another 11 died after D-Day. “This was his most cherished memento of the war,” Long said. It is currently being restored in Richmond.

Long pulls out another box, this one containing a medic’s armband that belonged to Robert Ware, a Lynchburg physician who died on a beach before he could help anyone. 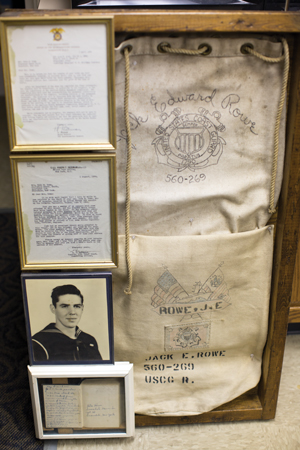 Artifacts have been donated from around the nation. One display box features two sea bags decorated by Jack Edward Rowe of Rhode Island. Rowe was a member of the Coast Guard who decorated the bag that he stored his portable typewriter and diary in. His last entry was 12:50 a.m. on June 6, 1944.

The archives also include commemorative items, such as the 1960s-vintage D-Day board game requiring players to figure out how to take the Normandy beaches. Each big anniversary, in 1984, 1994, and 2004, also created new mementos. One of the more unusual ones in the archive is a bottle of Calvados, a French apple brandy. The bottle was given to Earl Draper, a paratrooper from Texas who was among the 70-somethings who parachuted into France a second time in 1994 to celebrate the 50th anniversary of D-Day. Draper was injured in that jump and had to be hospitalized for a couple of days in Sainte-Mere Eglise. The town gave him the 1944 vintage Calvados, which has a whole pear inside, with etchings on the bottle to thank him for his service.

The vast majority of items in the archives are photographs, many with no names and no way to identify the subjects. There are also a few weapons, including an M-1 carbine found on a beach, restored, and later donated, but with no history attached. Of the more exciting items donated early on were some hand grenades, still live, which required a visit from a bomb squad.

Long, a longtime history buff who has been overseeing the archives for three and a half years, said they do everything they can to preserve items to archival standards, but some items will inevitably fade with time.

It’s more important that their stories live on.