Singer-songwriter returns to Lynchburg, where it all began

Asked how she’s doing one Tuesday evening in March, Jane Claudio describes herself as “a little emotionally drained.” The 28-year-old singer-songwriter, who got her start in Lynchburg and has since moved to Nashville, has just spent the day at a women’s prison.

On Tuesdays, Claudio helps out with a Bible study and life skills classes and sometimes sings for the inmates. “It’s just a little bit draining,” she said. “These women’s stories are a lot to hear. That’s where I’m coming from.”

Claudio—Jane Marczewski when she lived in Lynchburg—has a story of her own. It’s one that started in 2009 at Liberty University, where she confessed she was “never quite good enough to make it on any of the music teams,” and came full circle when she opened for Grammy winner Tori Kelly at Liberty’s Vines Center on April 6.

Undeterred after being rebuffed by LU’s music teams, Claudio started writing her own songs. “I started to make music that wasn’t intended for church,” she said. “That was kind of funny. The disappointments in your life, the ways you feel you failed, set you on a path that you were supposed to be on. I started making music that was more honest.”

Soon, she was the “it girl” of the local music scene, performing at Speakertree Records, Canvas, White Hart Café and the Lynchstock music festival, and landing the cover of Lynchburg Living in 2014. Out of the spotlight, though, all of the attention was starting to affect her negatively.

“All I ever wanted to do was play music and have people’s attention, cheering about what I sang,” she said. “I succeeded at that a little too much, because it was bad for me. I didn’t like the person I was internally. I didn’t know who I was. I was really focused on succeeding in my career and being likeable and newsworthy, but wasn’t taking care of my inner self.” >>

So, toward the end of 2014, Claudio made a decision: She’d go home to Ohio for a couple months and then it was Music City or bust. Once at home, however, she met and fell in love with fellow musician Jeremy Claudio and two months stretched into nearly a year. They married and moved to Nashville together in 2015. 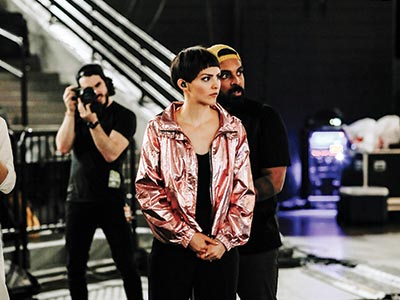 In Nashville, Jeremy started producing her music and performing with his own band. It was an adjustment for Claudio, who said it was “terrifying to be thrown into the culture where everyone is good at what they do.

“I feel like it just took some time … for me to exist without having to be special, in order for me to realize and accept that people care about me, even if I’m not impressive or the most beautiful or the most funny or whatever.’
“I was just born a little performer and when I came here I no longer had those tools to get attention.”’
Just when she was starting to get her footing, in September of 2017, Claudio was diagnosed with Stage 2 breast cancer. It wasn’t entirely unexpected. She said that around the time she left Lynchburg, she got a feeling that cancer would be part of her journey.

“I believe when you decide to follow Jesus—jump into that life—then we believe that God kind of lives in you through the Holy Spirit,” Claudio said. “I kind of had a little bit of a gut feeling or inkling that I’d get cancer.

“When you’re listening and paying attention, God gives you a little inkling of what’s to come. I felt like … there was going to be a three-year period to [get]to know myself and be healthy and I felt like music was going to come back to me.”

In the months that followed her diagnosis, Claudio had chemotherapy, a bilateral mastectomy and reconstructive surgery. For a while, she said, she was “bald and just looked like I hatched out of an egg.” She also didn’t feel like the “smart and witty” person she used to be.

“I didn’t have any of the things I’d had before but was still met with so much compassion and love and care,” she said. “This force of sympathy and empathy from people, it restored my faith in humanity, as tacky as it is to say that. It answered that question I’d been asking all my life: What if I wasn’t excellent? Would people still love me and still come?”

After surviving cancer, Claudio started to think about resurrecting her career. While known in Lynchburg as more of an American folk singer, she’d recently taken on a sound she describes as more “dance-y pop.” She chose a new name to go with it: Nightbirde.

Nightbirde came to her before she got sick, in a series of dreams. “I woke up three nights in a row, the same dream: all these birds singing outside,” she said. “It was almost like a dream within a dream. I’d wake up in the night with birds singing out my window.

“The third day, I woke up, went to the window and saw there were birds. It was so profound: this image of being able to sing through a dark time, even when there’s no proof that the sun is coming. To sing in anticipation of the dawn, even if you can’t prove it.” 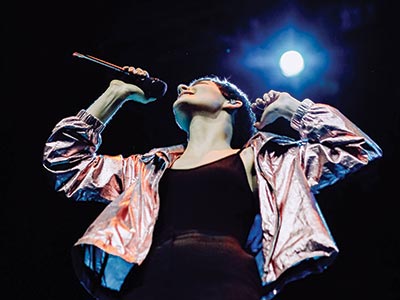 During her treatment and recovery, Claudio said Nightbirde was “kind of like a flag I carried.”

After everything that had happened—the move, the romance, the cancer—Claudio hadn’t played a show in four years. It was then that she got an email from someone at Liberty. They needed an opener for Tori Kelly and thought of her.

“I haven’t played a show in about four years,” Claudio said a few weeks before the concert. “Open for a Grammy award-winning artist? Totally wild.”

With a gig on the calendar, Claudio got to writing. There was one “super meaningful” song she said she had to finish before the concert, “Heartbeat.” The chorus goes like this: “I’m just trying to tell myself you can be the only one in this world, still the song is worth singing and life is worth living, as long as you’re breathing and your heartbeat goes on.”

She performed “Heartbeat” at Liberty and also shared her cancer story. “Being the opener, I was mentally prepared to not have the attention of the room … but in my instance, I felt like as soon as I got there I had the entire room’s attention,” she said.

“It was very abnormal, the crowd was just awesome. I had so much fun. … I wish every day could be like that, like the day after Christmas.”

And so the old Jane—“it girl” of the local music scene—was resurrected, if only for a weekend. “It was a weird feeling to come back,” she said. “I left this little local celebrity persona behind and I got all this special treatment. It was super fun.

“I don’t miss being this special person—there’s a lot of pressure that comes with that—but it was fun to step back into that for a weekend.”

Jane is now focusing on releasing more content—be on the lookout for her songs and videos. Keep in touch with her career at www.nightbirde.com