Lynchburg’s first luxury hotel is back on the map, more than 100 years later—with no detail overlooked

Four years ago, George Stanley and Blair Godsey, the developers behind Imperial Tobacco Lofts, Cliff’s Edge Lofts, and other recent Lynchburg building projects, were looking for a new challenge.

Then the Virginian, a former hotel at the corner of Church and Eighth streets, went up for sale.

For 30-some years, the Virginian had served as low-income housing. Before that, it spent 10 years as a dormitory for Liberty University, then Lynchburg Baptist College. For a brief time, in the late 1960s/early ’70s, it was the Stewart Arms hotel. But before that, from 1913 to 1968, it was the Virginian Hotel.

When the Virginian Hotel first opened on April 30, 1913, Woodrow Wilson was president of the United States, a loaf of bread cost six cents, and Lynchburg was amid what The Times Dispatch in Richmond would call its “Great Building Boom.”

At the time, the Virginian was one of several high-profile construction projects underway in the Hill City. The Times Dispatch credited the city’s chamber of commerce with not only seeing the need for a luxury hotel but also with raising the $300,000 needed to build it.

Hundreds of people attended the Virginian’s grand opening. The following morning, the Lynchburg News praised the hotel’s “artistic beauty,” saying it was “completed with every detail,” with a “spacious lobby … finished in tan, with a blue tapestry effect” and a “men’s café,” decorated with mission-oak furniture.

According to the paper, the first guest to sign in was Mr. S.E. Blackford, of Hampton, Virginia. 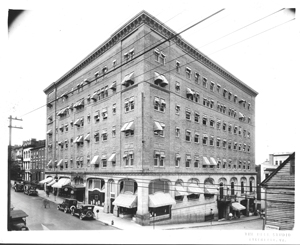 By 2014, when Stanley and Godsey first saw the Virginian, it wasn’t much to look at. As Godsey puts it, the hotel was a “very much-depreciated asset,” with leaky plumbing, a leaky roof and other serious issues.

Despite that, Godsey said he and Stanley “were able to see beyond the filth and disrepair.” There also was a hidden gem: the original marble staircase, which had been walled off from public view for more than 30 years. “It was beautiful,” Godsey said.

Initially, the developers thought they might convert the Virginian into high-end apartments, the kind of work they’d been doing for years. They soon realized that wouldn’t work because there was a large amount of space that couldn’t be easily converted into apartments.

So, Godsey floated an idea: “I proposed the idea of ‘How great would it be if it could be redeveloped and brought back as a luxury hotel?’ And everyone, at first, thought I was crazy.”

Intrigue, scandal and the ‘Hot Virgin’

Proposing that the dilapidated building be returned to its former glory wasn’t the first “crazy” thing to happen in the hotel’s history.

In April of 1916, for example, a Kentucky man wrote his hometown newspaper from the Virginian, described by the paper as a “swagger hotel at Lynchburg.” The man, Walter Stadelman, wanted to set the record straight on why he hadn’t been seen around town lately.

“Dear Sir,” he wrote to the editor of the Hopkinsville New Era. “Will you be kind enough to let my Hopkinsville friends know through the columns of your paper that I am living at Lynchburg, Va., and not in prison as a German spy, as reported in your city? I am no pirate or spy but enjoying the pure air and freedom of the mountains of Virginia.”

In 1958, an ax-wielding Virginian bellhop named Clarence Dabney wounded one man and killed another before being arrested. The murder victim, William Owen Grubbs, was attacked at a service station across the street from the Virginian. A Tennessee newspaper said Grubbs’ body was discovered by another bellhop and a hotel guest.

Then there was the “Hot Virgin.” During the Virginian’s first stint as a hotel, light bulbs on the hotel’s rooftop sign—it said “Hotel Virginian” at the time—would suspiciously go out. When they did, the sign would read “Hot Virgin.”

Stanley and Godsey decided to go for it. After some preliminary design work, they put the building under contract and spent the next year wrangling financing and state and federal historic tax credits. Construction began in 2016 and from that point on, Godsey said, “it was full-speed development.”

Asked about the challenges of resurrecting the Virginian, both Stanley and Godsey laughed.

“It was an incredibly challenging project,” Stanley said, citing, among other things, the creation of Lynchburg’s only rooftop restaurant, the Skyline Grill. “The rooftop addition was structurally very challenging. From a historic-approval point, we were able to get that rooftop addition approved and we were extremely fortunate.”

Stanley and Godsey also negotiated with Hilton Hotels for the Virginian to be part of the Hilton Curio Collection, a global chain of boutique hotels that also includes The Hotel Roanoke. “We realized very quickly, when we decided to do a hotel, that we were going to need, and wanted, an affiliation with one of the big hotel brands,” Godsey said.

“We identified the Curio Collection, a soft-branded, four- or five-star brand by Hilton that allows you to … utilize their reservation system and the Hilton Honors program, but also allows you to develop a unique, independent property.”

While Hilton gives owners creative freedom, opening a boutique hotel isn’t easy. “There’s a level of detail that goes into developing a boutique property,” Godsey said. “There were no grand standards, so it created huge amounts of design complications and challenges.

“Everything in the hotel was custom designed, from the furniture to the beds to the carpet. Trying to figure out how to bring [together]115 guest rooms, almost 10,000 square feet of banquet space and three restaurants with a common, but unique, design was the most-challenging part.”

Two years and $30,000,000 later, which Stanley said included “acquisition, renovation and the rear parking-deck construction,” it appears they’ve done it. 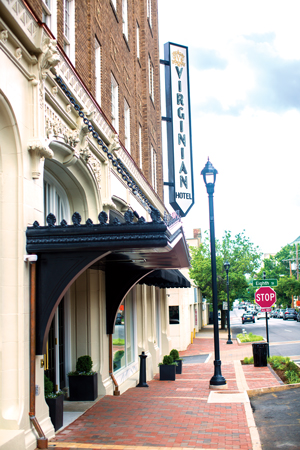 ‘Completed with every detail’

Like the newspaper’s 1913 description of the hotel, the second coming of the Virginian was “completed with every detail.” Throughout the hotel, there’s a midcentury-meets-Hollywood-Regency vibe, with white marble, crystal chandeliers, satin-brass accents, and Moore & Giles leather furniture. There’s also lots of original artwork, much of it local.

Above the check-in desk is a metal-and-glass piece by Paul Clements, creator of Lynchburg’s LOVE sculpture. In a gallery off of the ballroom are impressionist landscapes and cityscapes by Lynchburg painter Annie Harris Massie.

Local artist Kevin Chadwick was commissioned to do two series of paintings, one of which hangs in the elevator lobby, near the Marigold Café. Chadwick said the owners gave him lots of leeway, asking only for something in the art deco style that incorporated marigold flowers and told a local story.

Chadwick’s subjects are intertwined with marigolds, as requested, along with Italian greyhounds, a favorite breed of the artist’s. Chadwick also incorporated his signature technique, a patchwork of different patterns that is woven through each painting. As he describes it, it represents “peeling back the layers, through the years.”

One person who’s anxious to see the resurrected Virginian is Barbara Chavatel. Chavatel grew up at the Virginian Hotel, much like “Eloise,” title character of the popular children’s book series, lived at the Plaza Hotel in New York City. Chavatel lived at the Virginian, where her father was general manager, from 1938 to 1957, from the age of 2 to 21.

As a youngster, Chavatel rode her tricycle down the Virginian’s halls. She met movie stars, who were in town selling war bonds, and Helen Keller. “I remember that very vividly,” Chavatel said of Keller, the blind-and-deaf activist, author and lecturer. “She put her hands on my face and looked at me with her hands. I remember her saying, ‘What a pretty girl.’”

Chavatel was a favorite of the hotel staff, who called her “Miss Barbara” and doted on her. “They were very much a part of my family,” Chavatel said, adding that Lacey, the hotel’s maître d’, was particularly dear. “Lacey was one of my favorites and I think I was one of his favorites.”

When she went to Randolph-Macon Woman’s College, Chavatel said Lacey “told the major cook there that ‘I’m seeing Miss Barbara out to school and I want you to fix her something good to eat.’”

When Chavatel married in 1958, the largely African-American staff gathered to see her off to her wedding. Many attended the wedding as well. Because it was during segregation, however, the usher was flummoxed as to what he should do. Chavatel told him, “Well, you seat them. On my side.”

After her marriage, Chavatel moved away. The decades passed, the Virginian closed and the property fell into disrepair. When she returned to Lynchburg for college reunions, Chavatel said couldn’t bear to drive by her old home.

Now, she’s ready to see the Virginian again. “I have a friend in Lynchburg who’s been sending me articles,” Chavatel, who lives in Richmond, said. “I’m delighted that they’re [redeveloping]it. I certainly commend the owners and everyone who had something to do with it.”

She’s planning to attend the grand opening, which will likely be held in September. The owners are looking forward to seeing her. “We invited her to come up before the grand opening,” Stanley said. “We’ve told her we’d comp a room [for her]anytime she wants to [come]. She’s absolutely invited to stay. Our idea, for the grand opening, is to have her serve as guest of honor.”