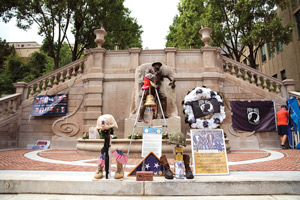 Vietnam War veteran Steve Bozeman didn’t realize what he had gotten himself into on Nov. 30, 2001 as he organized a peaceful gathering in downtown Lynchburg. Little did he know, that event would have massive influence on the greater Lynchburg veteran community and surrounding areas in the years to come.

Following the tragic events of 9/11, President George W. Bush deployed troops to Afghanistan. The world watched as the United States plunged into conflict with radical terrorist groups the Taliban and Al-Qaeda.

Meanwhile in Lynchburg, a protest opposing the war occurred on the steps of Monument Terrace in downtown Lynchburg, an iconic city location. In response to this protest, 80 veterans and patriots, led by Bozeman and several others, gathered on the other side of the street to peacefully counter the demonstration and show support for the war efforts in Afghanistan. At that point, there were no American casualties in what would become a near two-decade feud. 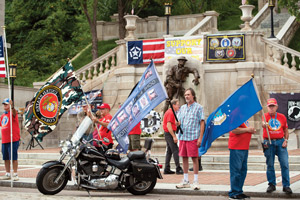 Following the counter-protest, World War II veteran James Hazelwood asked Bozeman, “Is everyone coming back next Friday to have a second rally?”

“Well, I didn’t plan on it myself,” Bozeman replied. It just so happened that the following week, Dec. 7, was the anniversary of Pearl Harbor, the infamous Japanese air strike in 1941 that claimed nearly 2,400 American lives. Upon this realization, Bozeman agreed: “Hell, yeah I’ll come back!”

Several others gathered at Monument Terrace on Dec. 7, 2001, to commemorate the lives lost at Pearl Harbor and to again show support for American troops in Afghanistan.

“Then we came back the third week, and people just showed up, and the momentum built up from there,” Bozeman said. 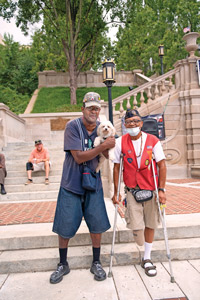 Since that first Nov. 30 gathering, the weekly Friday meeting known as the “Troops Rally” has taken place every consecutive Friday, totaling more than 1,040 weeks. Veterans, families of veterans, and members of the city and surrounding areas congregate to remember the sacrifices and celebrate American heroes.

“You can’t walk away from the Troops Rally without having inspiration in patriotism that’s displayed there every Friday,” Bozeman said. “To me, this is very fulfilling. My heart swells with all the things that we have done for two decades now. And it’s only starting.”

The weekly gatherings are as unique as their meeting place: Monument Terrace. This iconic downtown Lynchburg location honors the lives lost throughout America’s darkest conflicts, beginning from the Civil War.

The landmark has 132 steps and is decorated with several markers and monuments. Even since being renovated in 2002 and fully renovated in 2004, the Troops Rally has found ways to remain near the monument every Friday. There is even a designated “veterans’ room” 100 feet away from Monument Terrace that houses pictures, plaques, and posters, as well as other memorabilia. 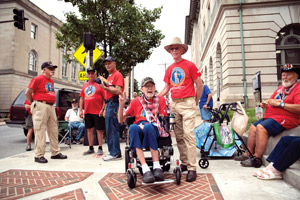 “There’s always an obstacle,” Bozeman said. “Marines have a saying, ‘improvise, overcome, and adapt,’ so we’ve figured out how to get through all of that.”

Meetings always end with the singing of the National Anthem, followed by announcements and the toll of the bell eight times at one o’clock—signaling “ending the watch.”

The group has campaigned for different local veterans’ efforts, including holding fundraisers for Richmond’s Hunter Holmes McGuire Hospital and supporting the National Center for Healthy Veterans Valor Farm in Altavista.

“The mission statement has always been ‘support our troops’‚” Bozeman said. “We do that, and we also support each other. The word has gotten out there that this is going on every Friday. The media has helped get the word out.” 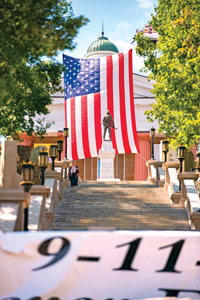 Between 50-80 participants, mostly Vietnam War veterans, attend the weekly gatherings on average. But thanks to heavy media coverage over the years, hundreds and even upwards of 1,000 have shown up depending on the occasion. On Sept. 10, the eve of the 20th anniversary of 9/11, the entire street was blocked off for the event.

The impact of these simple Troops Rallies can be felt throughout the Lynchburg community. Many nonprofits that specialize in veterans’ issues have found roots in the community because of the activism and attention brought about by the Troops Rally. One of these initiatives is the Lynchburg Area Veterans Council, a publicly supported 501c3 that for seven years has helped veterans avoid homelessness. 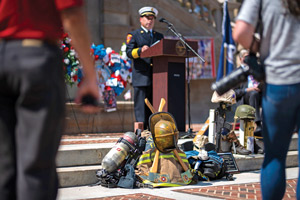 The Lynchburg Area Veterans Council, which started in the American Legion building on Greenview Drive, has received grants from Pacific Life and the Greater Lynchburg Community Foundation. It also organized and executed two veterans’ parades, the first ever in Lynchburg since 1938.

Eighteen months ago, the Lynchburg Area Veterans Council purchased the birthplace and childhood home of Desmond T. Doss, a Lynchburg resident and a Medal of Honor recipient who saved 75 people during World War II. The Garfield Avenue property is being used to house previously homeless veterans. The City of Lynchburg even adopted a proclamation making Oct. 12 Desmond T. Doss Day in Lynchburg. 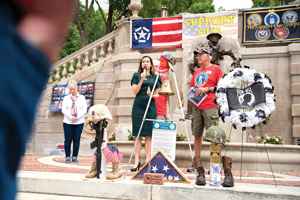 The National Center for Healthy Veterans at Valor Farm, a nonprofit that helps veterans avoid suicide and reintegrate into society, recognized the tremendous veteran support in Lynchburg and the surrounding area.

“Veterans share this bond, and I’ve tried to figure out what that is, and I think I have the answer,” Current said. “Veterans served different capacities, and we all put the mission ahead of our own desires. We put ourselves second. That takes character. That’s what binds all these different veterans, different ages, different services….” 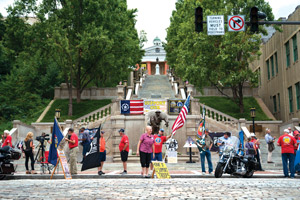 “There are a lot of good Americans who have character and understand what it means to have a heart of a servant,” he added. “And that’s why I have hope.”

Bozeman, who has attended over 1,000 meetings, said that the purpose of the Troops Rallies has always been and will always be about supporting troops, veterans, and their families. He doesn’t see the weekly gatherings ending anytime soon.

“Everyone feels connected. Everyone is glad about what is going on in Lynchburg,” Bozeman said. “The future is unknown. We still have troops all around the world. So, I don’t see these Troops Rallies going away.”