If you pay attention to any of the healthy buzzwords cycling around on the internet, you may have heard about adaptagens, superfoods, ayurvedics… the list goes on and on. Also a part of that group—turmeric.

With so much information available, a large amount conflicting, it can be hard to know what to incorporate into our daily routines and why. The great news about turmeric is it appears to be more than just a fad.

“As a physician, patients are constantly asking me about the latest health trends and turmeric is something that is not going to trend out, for very good reasons,” says Dr. Alexandra Cope, a licensed Naturopathic Physician in Lynchburg.

Still not sure where to start? We have answers to your top turmeric questions. 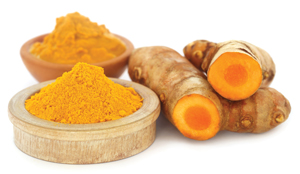 What is turmeric, exactly?

Turmeric is a spice derived from the turmeric plant with curcumin as its most active ingredient. It requires moderate temperatures and considerable rainfall to grow and thrive. While the spice may seem relatively new to hit the American food scene, it has been used in Asia and India for thousands of years.

You may have seen fresh turmeric in the produce section of the grocery store—it closely resembles fresh ginger. More accessible, though, is the ground, bright orange turmeric powder available on any spice aisle. Once predominantly found in Indian cooking, turmeric is now crossing over into a much wider territory.

How does it help my body?

Another big buzzword in the health and fitness world is inflammation—specifically, how to fight it. Inflammation of the body can play a role in a number of health issues from heart disease to Alzheimer’s. Studies have shown that curcumin can inhibit many molecules known to play major roles in inflammation.

“Curcuma Longa (turmeric) is related to ginger, another anti-inflammatory herb. It has long been used in Vedic & Chinese Medicine to alleviate pain and as a blood mover,” says Dr. Cope. “It is balancing to all types of people in both of these traditions, which makes it a great daily health food addition for most people.”

“[Many of those painkillers] can have serious side effects such as liver-failure, hormone disruption, and GI bleeding. Many of these NSAIDs also block our body’s ability to release anti-inflammatory constituents, or slow the body’s ability to heal,” says Dr. Cope.

Also, while a glass of red wine or a piece of dark chocolate is a great way to up our antioxidant intake, turmeric can help with that too. Because of curcumin’s chemical structure, it is a super powerful antioxidant that neutralizes free radicals. (Those are the damaging bad guys.) 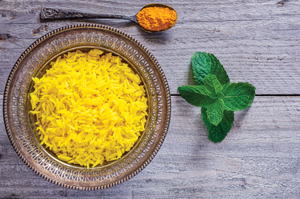 How should I incorporate turmeric into my diet?

First, you should always speak to a doctor before starting any sort of new supplement. According to Rachel Sanders MPH, RD, Liberty University’s campus dietitian, the FDA has approved curcumin as a “generally recognized safe” compound up to eight grams a day.

What’s great about turmeric is it can be easily added to most dishes you are already preparing for your family. Sprinkle it on rice or quinoa, roasted vegetables, chicken or fish entrees, and soups and stews. You can also add it into your morning smoothie.

Sanders also shares that curcumin is lipophilic, meaning it “loves fat,” so in order to improve absorption in the body it should be consumed with fat. She includes such examples as olive oil, nuts and seeds. Until more research is done, Sanders encourages her patients to enjoy turmeric for its unique flavor and what it can add to a dish flavor-wise first and with the knowledge that it may also help with inflammation if absorbed.

Where can I find it? 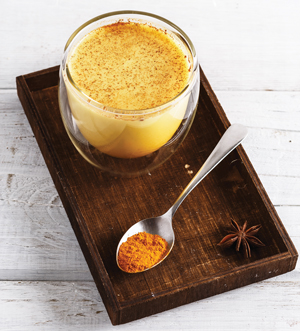 Combine all ingredients up to the cardamom in a glass and mix well with ice. Garnish with a sprinkle of cardamom, pink salt, and black pepper to taste.