Three years ago, as a last-ditch effort to gain control over her health, Shannon Keeney, a type 1 diabetic, started a ketogenic diet. For the first few months, she would “cheat” on occasion, but after the inconsistent start she has gone full keto and never looked back.

“Before this way of eating, I had poorly managed blood sugar levels, which often led to episodes of anxiety,” Keeney said. “Since I started eating this way, my anxiety issues have stopped, and I’ve been able to keep my blood sugar within range. I now have an A1C (measurement of average blood sugar over three months) in the ‘non-diabetic’ range.”

Her diabetes will never go away, but Keeney now feels like she’s in control.

“Prior to changing the way I eat, I wasn’t able to exercise because I had no control of what my blood sugar would do, and I was constantly tired and run-down,” she explained. “Now, I am working out at the gym three days a week. I would have never been able to do that before.”

Jen Douglas did the diet for six months, losing 35 pounds in the process.

“I did enjoy it although I’m not actively on it right now,” she said. “Once the cravings stopped at about 8 days, I found I had more energy, clarity, and physically felt better all around.”

For those unfamiliar with ketogenic, or “keto,” diets—Wait, isn’t it something to do with avocados?—Centra Health Registered Dietitian Stacey Harris was happy to shed some light.

“The keto diet focuses mostly on low carbs, higher fat, and moderate protein,” Harris said. “The focus is putting the body in ketosis, burning fat instead of glucose for fuel. Generally, you are looking at between 75-90 percent of your calories from fat, about 10 percent from protein, and about 5 percent all-together from carbs.” 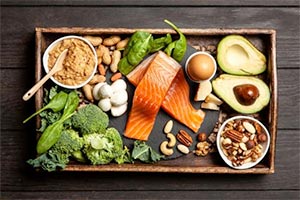 Fat? Isn’t that supposed to be a bad thing?

“Your healthier fats are going to be more beneficial,” Harris explained. “You want to stick more toward your olive oil base—olives, avocados, things of that nature. [Keto dieters] choose things like your non-starchy vegetables—broccoli, cauliflower, cabbage or green beans for example—to give them the bulk of their foods so they eat adequately throughout the day but keep their carbs low.

You want to still be cautious about saturated fats, like too much red meat or too much coconut oil.”

Harris has observed a number of pros to the keto diet which explains its thriving popularity. Chief among them is “rapid” weight loss results.

“Most people, because they are restricting an overall food group, will reduce their calorie intake and see a pretty quick weight loss,” Harris said. “A lot of people are finding their cravings and their hunger are dramatically reduced. It is just one of the things that kind of goes along with the diet. Fat and protein themselves take longer to break down than carbohydrates do in your body.

So, you are going to stay fuller longer because it takes longer to digest.”

Douglas recalled how the first 12 pounds dropped quickly, within a month or two. “I liked the fact that my body was doing a lot of the work for me.”

“The key to keto is staying in ketosis,” she added, “where the body burns fat for energy instead of carbohydrates, its preferred easy energy source.”

Harris said that people (like Keeney) with medical conditions can benefit from the diet’s effects.

“It can also elevate the body’s ability to burn fat, which results in a more stable flow of energy to all the organs and tissue,” Harris explained, “so, sometimes it is more beneficial for a type 2 diabetic or a prediabetic because it can also help reduce their glucose levels and numbers.”

On the flip side, however, Harris said that the jury is still out on ketogenic diets. Keto simply hasn’t been around long enough for any long-term, scientific data.

She also recommends that people interested in the keto diet do so while being monitored by a health professional because there are some possible side effects.

“Some people lose muscle tissue because they are not eating quite as much protein as they may have in the past with some other diets,” Harris said.

Other users may get “keto flu” when switching to a stricter, more restrictive diet, with symptoms including fatigue, headaches and constipation. 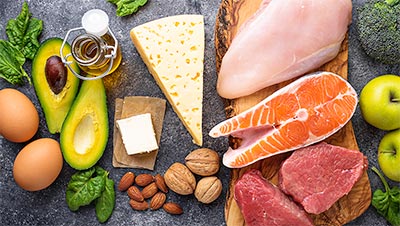 Overall, Harris said the important thing is making good lifestyle choices—choosing healthier options, monitoring portions and engaging in physical activity. Keto can be a great tool to help with that.

“There are lots of options; it kind of just depends on what works best for the individual and helps them feel better and makes them see results that they are happy with,” she said. “You generally want a lifestyle change, so you want to pick changes that you can stick with and maintain.”

Harris has observed that keto seems to work well for people looking for quick results, but isn’t generally something people stick with.

Sasha Cash found this to be the case: “I personally think that keto is a good diet for me to do periodically, but not a sustainable long-term diet.”

She is currently off keto, but still follows many of its principles.

“When I’m not actively on the keto diet, I still refer back to how good I feel when I’m on a low-carb diet and often choose to cut out heavy carbs or sugars from my everyday diet,” she said.

Starting keto was difficult, requiring a lot of meal planning, but the benefits were tremendous.

“I would wake up with great, sustained energy and a clearer mental focus,” Cash said. “[The feeling] was so liberating and exciting for me. I had more energy, which prompted more motivation to complete tasks and get things done in my day-to-day life.”

Douglas said that those interested in trying keto should be prepared to make a day-to-day investment.

“It is not a diet that makes it easy to find things on a takeout menu so meal planning was key,” she said.

But for those who can maintain the discipline, keto does offer the possibility of a radically energized life.

“I can definitely say that the diet absolutely changed my lifestyle,” Cash said.

Keeney recommends a positive outlook for success with Keto: “Give it a good honest try. Don’t focus on things you can’t eat, but think about all the things you can.”