When it comes to planning and executing a styled shoot, you have to be prepared to roll with the punches.

While we had planned to photograph a historic-meets-modern tablescape outdoors, mother nature decided otherwise. March 27 was looking clear as a bell up until the morning of our planned shoot; out of nowhere, it seemed, the forecast called for heavy rain and thunderstorms that afternoon/evening and that’s exactly how it played out.

Nevertheless, the Lynchburg Living team made it work, thanks to the extremely hospitable Mikael (Taste contributor) and Traci Blido who helped us carry out our vision in their sunroom and even let us forage for extra fresh greenery in their backyard. 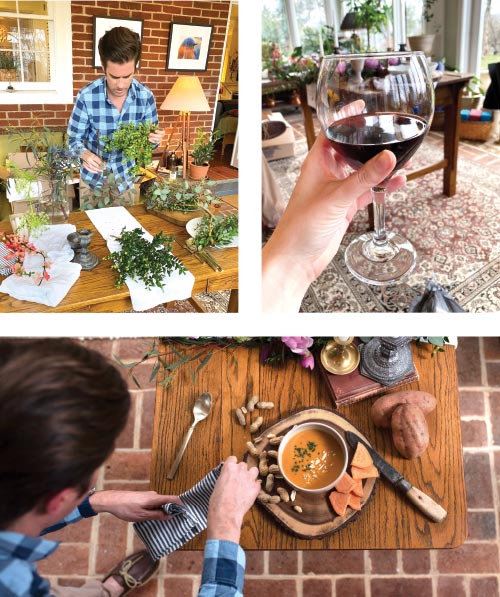 Most of the props—from the plates to the old books to the linens—were rounded up from everyone’s houses. Art Director Chris Meligonis lead the way in assembling the table from the first piece of greenery to the last lighting of a candle.

Photographer Ashlee Glen traded her usual step ladder for a much taller version to help us capture the best overhead angles of the heritage-inspired recipes created by Mikael.

Meanwhile, Editor Shelley Basinger sat on the couch watching everyone work while drinking wine. (Kidding. She helped too. But there was one small wine break.)

Read the full feature, learn some local fare history and get a little hungry, starting on page 96!