A Reprieve for Lynchburg’s Only Lake

Laura Henry-Stone envisions the day when the area between the University of Lynchburg and Faculty Drive will be a thriving wetland—with plants filtering runoff, waterfowl dabbling in Blackwater Creek, and community members walking across boardwalks to enjoy a healthy ecosystem.

The wetland would take the place of College Lake, which was drained in August after a heavy rainstorm sent water over its dam. In late October, the city temporarily refilled the lake pending the construction of a new bridge and removal of the dam. The city says refilling the lake will reduce the debris clogs at the dam’s emergency outfall and slow the sediment that is currently being washed into the downstream reaches of Blackwater Creek and the James River.

Henry-Stone, a professor of environmental studies at the University of Lynchburg and the university’s liaison with the city, acknowledges that it will take several years and a lot of money for her vision for College Lake to become a reality. 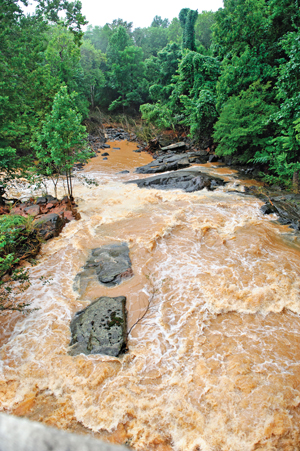 When parts of Lynchburg received a whopping 5 inches of rain on Aug. 2, the surge carried water over College Lake dam and Lakeside Drive, raising Blackwater Creek 10 to 12 feet above its normal flow. In all, an area of 22 square miles drains into the lake.

The flood left behind a mess, destroying trees and infrastructure along the Blackwater Creek Trail system and dumping a polluted plume into the James River, which flows into the Chesapeake Bay, a body of water the state is under mandate to help clean up.

Another mess was created when the city decided to drain College Lake two days later, in just three hours, fearful that the dam would not hold. The city acted under a state of emergency to drain the lake without having to consider environmental impacts. That killed countless fish and other critters that once called the lake home, as well as those downstream.

The city acted out of concern for homeowners who lived below the dam, but officials acknowledge it would have been far preferable to have taken action in a non-emergency time frame.

The damage from the August storm would have been far less if, for example, College Lake dam had already been removed and a stable wetland been in place. City assessors estimated damage from the Aug. 2 storm at $18 million, including $10 million in damage to the dam and $5.6 million in damage to parks and trails. City officials counted 324 downed trees in the streambed. Piles of silt landed on the Blackwater Creek Athletic Area field and elsewhere, and three pedestrian bridges were destroyed.

The city and university have been in discussion for years about how best to manage the lake. In 2008, the state changed the regulations governing dams, said Tim Mitchell, director of water resources for the City of Lynchburg, and the city was told the dam had to be strengthened or removed. While the city and university were searching for options, the city was given a conditional permit to operate the dam until March 30, 2020.

Even before the dam became a safety concern, Tom Shahady, a professor of environmental science at the University of Lynchburg, had urged the city to promote smarter development that didn’t create such huge runoff and sediment loading in city streams and College Lake. “When you build irresponsibly, you get these problems,” Shahady said.

College Lake was created in 1935 when the City of Lynchburg dammed Blackwater Creek to build U.S. 460, now Lakeside Drive. The city owned the dam, and Lynchburg College (now the University of Lynchburg) owned the lake, but a city park gave everyone some access to the city’s only lake, providing students and residents a place to swim, boat, fish, and ice skate in then-colder winters.

In Full Circle; Memories of Lynchburg College and Beyond, the memoir of former Lynchburg College President M. Carey Brewer, he writes about his son Rob’s memories of College Lake. “At this writing, Rob’s fondest memories are those of ice skating on College Lake as a fourteen-year-old on those rare occasions when the ice was thick enough. He recalls the joy of skating to the far end and back with abandon. Every member of the family enjoyed skating on the lake from time to time, but there was the ever-present fear that the ice might break with tragic consequences.”

Almost no one has skated on the lake for decades because the ice has not been thick enough to support a person’s weight, said Julius Sigler, former dean of Lynchburg College, who first came there as a student in 1958. Any attempt to skate now would have tragic consequences. Sigler also noted that the city park was hard to get to because of the heavy truck traffic whizzing by on U.S. 460. 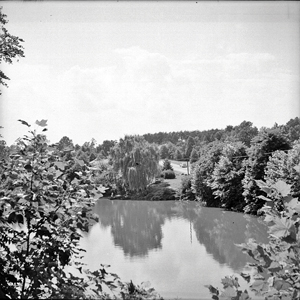 A bigger problem lurked beneath the surface, however. By the 1950s, raw sewage was flowing into the lake on a regular basis, Sigler said. While locals still fished in the lake, no one dared swim in it.

Once the city built its combined sewer overflow system in the late ’60s and early ’70s, the sewage problem improved though bacteria counts continued to spike in the lake after it rained, said Sigler, who is also a longtime member of the Robert E. Lee Soil and Water Conservation District.

Throughout this time, professors, including the late Ruskin Freer, were already using the lake area as a laboratory to study everything from insects to plants to bacteria levels from the sewage. As development began creating a sediment buildup, students started measuring the decreasing depth of the lake.

By the 1970s, development was beginning to create bigger sediment problems and more stormwater runoff. Rain hitting buildings, parking lots, and roads has no place to go but downhill fast. The flush of water carves the banks, putting even more sediment into streams and rivers.

In the 1990s, the College built a cabin-like structure and dock on the lake at Beaver Point, where students had dances, picnics, and get-togethers. As development accelerated, the lake began catching and storing enormous amounts of sediment and pollutants from Wards and Timberlake roads, and the lake filled in at Beaver Point, leaving the dock high and dry. Students pretty much stopped using it in the early 2000s, but the lake remained an outdoor laboratory for science students.

“The lake was a gigantic stormwater pond,” said Shahady, who has studied College Lake for 16 years. He predicted the lake would eventually fill in unless measures were taken to stop the flow of sediment. College President Kenneth Garren lobbied for federal funding, but Congress failed to help.

Nevertheless, Shahady found sizeable populations of bass and other fish still thriving in recent years. They died when the lake was drained, and so did Garren and Shahady’s dream of preserving it.

Turning College Lake Into a Wetland

In the coming years, the city will remove the dam and replace it with a four-lane bridge over Blackwater Creek, Mitchell said. In the meantime, refilling the lake will keep debris from clogging a temporary grate and will decrease the flow of sediment from the lakebed into Blackwater Creek, which has remained a muddy brown all the way to the James River. But the long-term goal for the area is turning it into a wetland.

A number of structures, as well as natural plantings, will be required to make this happen. Even then, Sigler worries that it won’t look the way it should. “My concern is how do you make it look like a reasonably wild stream,” he said. 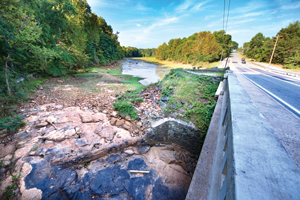 A wetland is a land area saturated with water, either permanently or seasonally, with aquatic plants adapted to this unique soil. Wetlands are critical to healthy ecosystems, but, according to the U.S. Geological Survey, throughout the U.S. we have destroyed or degraded 50 percent of wetlands with development, engineering projects, agriculture, and fossil fuel development.

Still, wetlands shelter more than one-third of the country’s threatened and endangered species, according to the Environmental Protection Agency. Without wetlands, a huge number of songbirds, waterfowl, shellfish, and mammals wouldn’t exist. If trees are the lungs of the planet, then wetlands are its kidneys, removing pollutants including nitrates, phosphorus, and heavy metals. Clean and plentiful drinking water depends on healthy wetlands.

Wetlands also provide people with many ways to enjoy nature, including bird watching, biking, and hiking, activities that could easily occur in the College Lake area. While a number of people will mourn the loss of College Lake when it is permanently drained, there are many benefits to restoring this area to a functioning wetland.

Both Tim Mitchell and Laura Henry-Stone remain optimistic that this can happen. Henry-Stone said the city and university are exploring funding options, including nutrient trading credits that could be received for reducing the nitrogen and phosphorous levels in the James River, and ultimately, the Chesapeake Bay.

Henry-Stone will keep the community up-to-date on the project through a blog on the university’s website at redchairblogs.com.