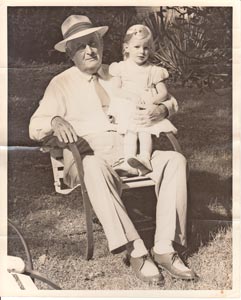 Until Carolyn Gills Frazier started researching Stanhope, Chronologically, published by Blackwell Press in 2018, even those who were closest to the late-architect Stanhope Johnson didn’t know the extent to which he had, almost literally, designed Lynchburg.

“He never said anything about his projects,” Johnson’s niece, Anne Bond-Gentry, said. “We knew a few things he’d done in the city, but I had no idea of the volume of the stuff he’d done here until Carolyn started working on the book. I was blown away.”

Over a career that spanned seven decades, from 1898 to 1966, Johnson lent his talents to somewhere between 700 and 800 building projects, more than half in Lynchburg.

He designed department stores and supermarkets, factories and hospitals, schools and churches, hotels and vacation cabins, and apartment buildings and houses in nearly every architectural style. He even designed tombstones, including his own.

Frazier’s “Lynchburg Directory” of Johnson’s work includes about 100 projects on Rivermont Avenue alone. “I [knew]that he worked on the hospital and Randolph-Macon [Woman’s College] but all of Rivermont Avenue?” Bond-Gentry’s sister, Nancy Brothers, said.

Growing up in Lynchburg, Bond-Gentry and Brothers, along with their sister Helen Reveley and brother Everett Bond Jr., spent a lot of time at Brookside, the Link Road home of Stanhope and Elizabeth Johnson. Elizabeth was the older sister of their dad, Everett Bond Sr.

“We would go there for ‘Camp Brookside’ every summer for a week or two weeks, and on weekends, and do all kinds of things,” Brothers said.

The Johnsons didn’t have children of their own, so the Bonds were surrogates. “They were like grandparents to us,” Brothers said. “She was older than my dad, about 15 years, and he was older than she.”

Their uncle, they called “Stan.” Elizabeth was “Bibber.” Brothers said she and her siblings were the “only ones in the world” who called the renowned architect “Stan.” As for how “Bibber” came about, it was a family thing. 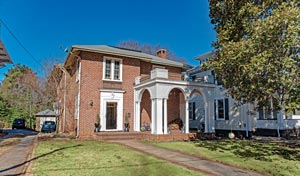 “Bibber and Stan were our names for them, but they were Elizabeth and Stanhope to the world,” Brothers said. “He called her Elizabeth; we called her Bibber. It was just our kids’ name and it stuck.”

Johnson and his wife moved into Brookside in 1926. He had purchased the circa-1823 cottage in 1913, eight years before he married the former Annie Elizabeth Bond, a Randolph-Macon Woman’s College graduate from Brownsville, Tennessee.

At Brookside, there was a creek for fishing and a barn for farm animals—cows, a horse and a donkey. Elizabeth raised fox terriers, so there were often puppies to play with. “It was always a happy place,” Brothers said.

In the basement creamery, the Bond children helped Elizabeth make butter balls, a staple on well-appointed tables. Elizabeth also sold her butter balls locally. “We all participated,” Brothers said. “That was the way they served butter. Everything was butter balls.”

The Johnsons shared an interest in horticulture. Elizabeth, the more outgoing of the two, entered flower shows and spoke at garden clubs across Central Virginia. At Christmastime, she made her own boxwood wreaths and flower arrangements.

“[They had] wonderful gardens, vegetable and flower,” Reveley said. “It was really like a working farm.”

A photo, taken in the 1950s and published in Frazier’s book, shows Johnson and his wife in the rose garden, she in a pale gray suit and he in riding breeches, boots, shirt and tie and a straw fedora. According to his nieces, it was Johnson’s usual practice to go ride his horse, Commander, in the evenings after work. “He was a great horseman,” Reveley said.

Dinners at Brookside were formal. Meals, prepared by a cook who lived with her family on the property, were served on English Royal Crown Derby china.

Local architect Robert H. Garbee dined at Brookside once, in 1956. At the time, he was 26 years old and working for the firm of Pendleton S. Clark. The invitation came after a slide presentation he did for the Lynchburg and Hill City garden clubs about the gardens of Europe. 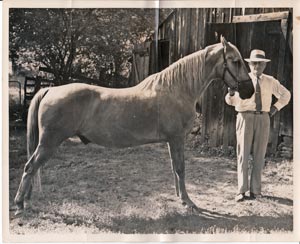 Afterward, Garbee was approached by Mrs. Stanhope Johnson. “[She] came over to me and said, ‘Mr. Garbee, if I had any idea this would be such an excellent program, I would have insisted Stanhope come with me.’”

Flattered, Garbee said he’d be happy to show Johnson the slides. A dinner invitation followed. “It was an extraordinary dinner,” Garbee said. “The first course was a slice of Crenshaw melon the color of which matched exactly the colors in the plate. … It was a very elegant dinner.”

Johnson’s public persona, like his dinner table, was formal. Brothers went so far as to say, “I think he was so formal that people were probably afraid of him,” but the Bond sisters saw another side of the architect at Brookside.

Brothers recalled his sense of humor. “He would tease me unmercifully,” she said. “I got a Christmas doll and he named her Sarah Kate. I thought that was the worst name. He hid Sarah Kate from me Christmas morning and my mother had to call him because I was just in tears. …

“He would kind of push our buttons a lot, but we always knew it was in good fun. And he was eager for us to learn new things and he was just very special.”

Reveley said her uncle would pay her as much as a quarter at the dinner table to eat with her right hand. “I was left-handed and it drove him crazy,” she said.

And then there was the time Johnson came home with a Shetland pony in the back seat of his car. “I was about six years old and they brought it home in Stanhope’s car,” Bond-Gentry said, referring to her father and Johnson. “In the old days, in the 50s, cars were big. They put it in the back seat.”

At the holidays, Johnson took his nieces and nephew to the Christmas party the Rotary Club threw for the children of its members. “He was gentle in that way, but again he had a very formal side to him,” Brothers said. “You wouldn’t say that he was cold, but he was formal. He was very particular about things and had his regular routine.”

One of these things was bed time—his own if no one else’s. “He had this thing where he would say, at about nine o’clock, [that]it was unbuttoning time, time to go to bed,” Bond-Gentry said. “He’d go into a room and say that and then he was going to bed. If everyone was still there, he’d say, ‘It’s unbuttoning time’ and he was gone.”

Reveley described her uncle as “fun to be around” and “always pleasant.” She also said he was humble, especially considering the architectural legacy he left Lynchburg. “[People] don’t realize how incredibly modest he was about all of it,” she said.

“He had an incredible practice, but never boasted or talked about anything in particular. He was just this kind of incredible Renaissance person: a great horticulturalist, horseman, architect. He was just really fascinating to be around.”

Read All About It

Stanhope, Chronologically—written by Carolyn Gills Frazier—is available at Givens Books, the Farm Basket and Blackwell Press (new studio space is located on the lower level of 311 Rivermont Ave.) The book has a directory of Lynchburg commissions by address.

Carolyn would love to hear from readers on her website: stanhopejohnsonarchitect.com.