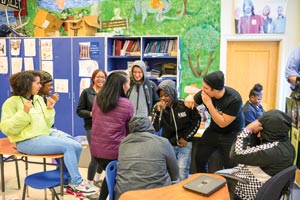 That’s the rule teacher Casey Wood has for students in his “Exploring Language and Culture Through Hip Hop” class at E.C. Glass High School, an elective that explores hip-hop and rap as an art form.

As soon as the bell rings on Fridays, the classroom is quickly transformed into a makeshift performance space. Students circle up and huddle around their “DJ booth,” a filing cabinet with a computer and speakers on top. But it does the job as they pass the microphone around and rap about whatever comes to mind.

As the music blasts through the speakers, other students are scattered around the room. Some write, some draw, and others choose to quietly watch the performance unfold.

“The teacher next door is pretty understanding,” Wood jokes. “He doesn’t give his students tests on Fridays since he knows what we’ll be doing in here.” 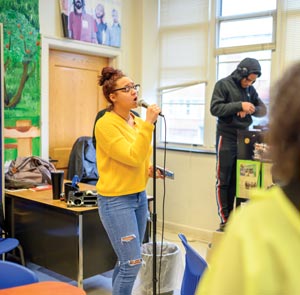 “Growing up, I had a lot of teachers who inspired me,” he said. “When I was halfway through college, I just knew that was what I wanted to do.”

Over the years, Wood wanted to find a more creative way to teach classic literature—a way that was relatable to his predominately black students. He already had a form of Freestyle Fridays in his English classes as a way for students to burn off steam following a long week of learning vocabulary. That led him to present the idea of a hip-hop elective to the administration. A musician himself, Wood thought this could be another way to bridge the gap with his students, since most of them have listened to hip-hop since their childhood.

“I started thinking about how I could connect Charles Dickens to Tupac,” he said. “Ultimately, it’s all about how people use words to touch other people. Words matter and influence our lives, but art looks differently to other people.”

This is the third year Wood has taught the class, which is open to sophomores, juniors, and seniors. It has a strong following, with nearly 100 students enrolled over three sessions.

“We cover poetry, storytelling, some lessons on hip-hop artists, and politics. This year, we’ve introduced a music production continuation of the class where our students can do some recording or DJ,” Wood explained.

The coursework also allows room for creativity. For example, Wood asks students to choose an artist and see how far back they can trace his or her influences—some dating all the way to Mozart. More recently, the students studied Kendrick Lamar’s “good kid, m.A.A.d city” album.

When Tavian Edwards first signed up for the class, he saw it as an easy way to fulfill his graduation requirements. But after he was assigned a project about the meaning behind “What’s Going On” by Marvin Gaye, he realized the impact music has on the world.

“You don’t really listen to the lyrics most of the time,” Edwards said. “But when you sit down and focus on it, you can see how much pain and feeling [Gaye] put into that song and how he wanted to bring the community together.”

Senior Victoria Jenkins also had mixed feelings about the class before it started. 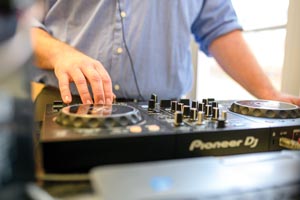 “At first, to be honest, I didn’t know how learning hip-hop from a white teacher was going to go. But I appreciate Mr. Wood’s incorporation of the culture and how he tries to understand what rap music means to us,” Jenkins said, adding that the class is a true safe haven for students.

Senior D’Kiya Jackson agrees, saying many students feel like they can’t truly express themselves while at school—but in this class, there is a different vibe.

“Mr. Wood is open to everything,” Jackson said. “Whether you like poetry or jazz, if you like hip-hop, he’ll allow you to express yourself in any form. He doesn’t exclude anyone. … That’s really important with kids our age.”

Though Freestyle Friday is a time to perform, Wood doesn’t pressure his students to share publicly. Fridays are also a time for students to journal, draw, record or pursue whatever art form they choose. For example, in the weeks after Kobe Bryant’s death, Jackson took time to sketch out a tribute to the basketball player during Friday’s class.

Wood said there are many benefits to giving students open-ended time to be creative.

“It boosts their voice and gives them confidence,” he explained.

And Jenkins said she has seen many classmates come out of their shells this year by embracing the rhythms of rap or hip-hop—regardless of their background. 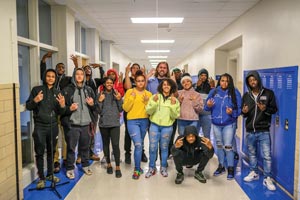 “It’s not just a certain group of students rapping in the class,” she said. “You got all types of genders, colors… everybody’s rapping. It’s not condensed to one type of person.”

“It’s not the same type of rap either,” Edwards added. “It’s not just heavy beats or snare drums. You can have something that’s more spiritual. Sometimes there’s pan flutes and the beats can switch and become a different type of music.”

The impact this class has had on students continues well after they graduate. Wood says he still keeps in touch with some of his former students.

“Many feel like they’ve found their voice [because of the class],” he said. “That’s how I judge if I’m successful as a teacher.”

As Jenkins, Edwards, and Jackson get ready to graduate in a few months, they are already reflecting on what they’ve learned from Wood and his hip-hop lessons—that anything is possible if you just put yourself, and your voice, out there.

“You have the ability to be open in the world,” Jackson said. “We’re entering a new chapter in our lives and Mr. Wood taught us to be open. Try new things. It’s okay to step out of your comfort zone.
I feel like that’s what his class is about. It’s about expressing yourself and being free.”