After a long stretch of whites and neutrals, we are extremely excited to announce: color is making a comeback. And if you’re ready to bring some bolder hues (and patterns) into your home, what better place to start than on the walls?

“People are definitely wanting to add in more color,” says Mary Lou Stufano at James T. Davis Paint and Design Center in Lynchburg. “There has been a very strong shift towards the artisanal movement and working with local artists. People are also traveling and bringing back fabrics from other countries that they want to work into their style.”

Mary Lou and fellow James T. Davis designer Kara Oliver not only showed us a few top color choices, they took it a step further and showed us how to style these paint options in your home.

Colors of the Year 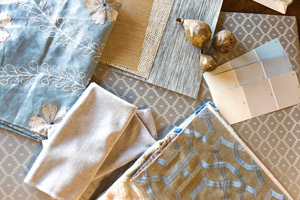 While you may have heard about Pantone’s widely publicized “Color of the Year” (their 2020 pick is an elegant Classic Blue), you may not realize that local paint stores, such as James T. Davis, research and prepare their own list of recommendations. What’s even better—it’s not limited to just one color!

From “Mullen Pink” to “On the Nile,” their 2020 lineup includes mostly vibrant, rich colors—with only a few tamer counterparts. The color palette as a whole gives off a formal, traditional vibe. Kara and Mary Lou see these colors working well in one of Lynchburg’s older, historic homes with dark mahogany furniture, even wicker and rattan. But don’t forget to bring in some modern touches so it doesn’t look dated.

“Add maybe a brass and glass coffee table or a very modern piece of art to tone down that traditional feeling,” says Stufano.

If you aren’t quite ready to paint your living room the orange-inspired “Ballet Cream,” Oliver suggests starting small. “Think in small doses. A half bath for example. A homeowner can have some fun with that space,” she says. 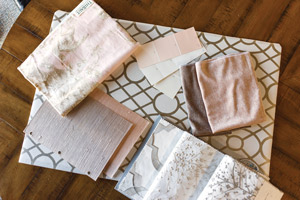 Taking a step down from the Colors of the Year are two “transitional” looks created by our James T. Davis experts. “These are a transition between a traditional and contemporary design. You may see a traditional style or wood furniture but much cleaner lines. Not curly and fussy,” Stufano says.

The colors they chose for these looks—a range of pinks and blues—are not neutrals, but they are soft and feminine, even in their darkest shades.

“Gold accents can play well off the blue,” Oliver says, but adds that silvers would work as well and encourages homeowners to mix metals. “Because they aren’t as glaring and shiny anymore, some metals you can’t even really tell if it’s a gold or a silver.”

One way to bring a metal into a room is with wallpaper. A modern, geometric pattern can give these pink and blue shades a little bit of an edge. Add other textures to draw people in such as velvet, a popular fabric choice. “People like things that feel good, and light plays off of velvet differently than it would a linen,” says Stufano.

If velvet and Laura Ashley–inspired colors have you thinking, “what decade are we in?” don’t fret. “Some colors and textures are definitely coming back into play, but they are being presented differently. For example, we are seeing cleaner, straighter window treatments. None of those valences that used to be popular,” Stufano says.

Overwhelmed By Your Choices?
Oliver and Stufano tell clients to find items in their home that they love and bring them to their consultation. Then, they can start choosing some colors around those choices. “This could be a pillow, a fabric, a piece of art. I had someone bring me a shell once,” she says. “For people with new builds or those who are ‘I don’t know where to start,’ this narrows down their selections.”