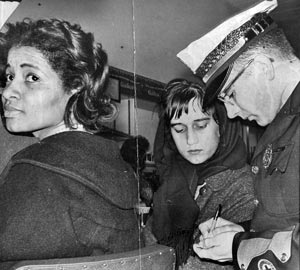 Sixty years ago, six college students sat down together for a cup of coffee at the lunch counter at Patterson’s Drug Store in downtown Lynchburg. But because two of those students were Black, all six were arrested and charged with trespassing.

Their Dec. 14, 1960 arrest and subsequent conviction, which included a sentence of 30 days in jail, sparked a number of other sit-ins, forcing residents to grapple with the ugly inequality in their segregated city.

“Oh my God, that was a wonderful day,” recalls the Rev. Virgil Wood, then pastor at Diamond Hill Baptist Church who helped plan the sit-in. “I remember it like it was yesterday. It’s indelibly imprinted in your spirit.”

Now 88 and a resident of a Houston suburb, Wood said the sit-in “was an originating moment in some ways” and was significant because of the institutions involved. 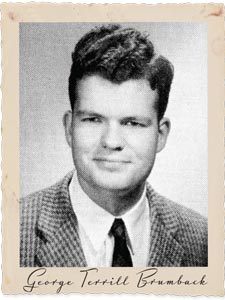 “It was just an obvious moral issue; (segregation) was wrong,” said Hunter, the only one of the six interviewed for this story. Two have died, one is ill, one can’t be found, and the other declined an interview. 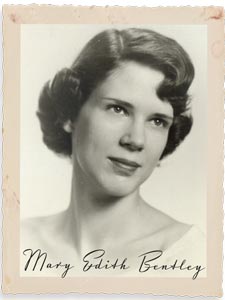 Hunter, who will turn 80 in December, has not talked about the sit-in much over the years, but summed up the action this way: “Two things I would emphasize are that nonviolence can work, and things can change.”

Hunter, who had a career in social work and lives in Maine, acknowledges that racism remains a problem, but says things have improved vastly. He had seen signs of segregation, including separate drinking fountains, as a child. “You saw that kind of thing all over the place,” said Hunter, who grew up in Indianapolis. “It irked you.”

The decision to become involved in civil rights was a no-brainer for Hunter. He said a group of students had been meeting at Diamond Hill for a few weeks and realized they needed to take action. They chose Patterson’s Drug Store because of its prominence on Main Street and hoped to convince drug store owner William S. Patterson to get on the right side of history.

Instead, Patterson called the police and had the students arrested for trespassing. A patrol wagon took the students to jail. Hunter said a Black businessman posted his bail that evening. 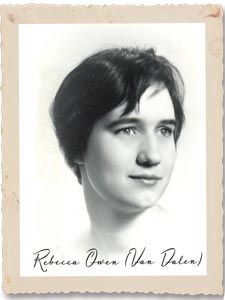 The very next day, Ball participated in a sit-in at Peoples Drug Store. “We didn’t want to go home for Christmas vacation and leave (the people of) Lynchburg thinking there were just six bad guys in the town,” Ball, now 81, said in a phone interview from her home in Atlanta.

Ball joined four other R-MWC students and Miriam Thomas Gaines, a Black student from Campbell County High School, at Peoples. Miriam’s sister, Barbara Thomas, had been arrested the day before.

“I’ve been doing a lot of thinking about it,” Ball said. “This is an issue now and has never not been an issue.” Her book club in Atlanta is reading The Race Beat, about how the media covered racial issues from 1958 to 1960, which makes her realize “the things that I as a white woman don’t have to wake up thinking about.

“I believe some of the material that’s being written now is beginning to get white people to wake up,” Ball said, adding she is hopeful because white Episcopal parishes in her area are talking about white privilege.

Ball’s life reflected her early beliefs. Her work to help battered women, foster children, and young girls earned her national recognition. She has also worked as a mediator and trainer for an alternative dispute resolution center in Atlanta.

For Miriam Gaines, now 77 and a resident of Forest, her decision to join the Peoples sit-in was prompted by the racism she experienced as a child. Until very recently, she has been reluctant to talk about it. When she was asked to tell children about the sit-in at Pleasant Valley Church earlier this year, however, she couldn’t resist. She shared the notes from her talk.

Gaines said her father worked three jobs to support his nine children. He owned a store and a barbershop and was a porter carrying mail and packages at a railroad station. Her mother stayed at home and periodically did day jobs cleaning the homes of whites. 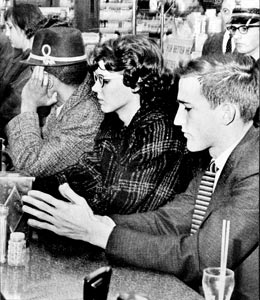 “One of the things that bothered me was how the white men, women, and children would call my mother, Sallie… even though she was much older than they were,” Gaines said.
Her mother had to use the back door to those white houses. On vacations with her family, Gaines learned that Blacks couldn’t stay in hotels or motels, eat at restaurants, or use restrooms that were for whites only, much less attend the same schools or live in the same neighborhoods.

Photo courtesy of News and Advance“We had a white school one block from our house,” she said. “We had to pass that school and attend a Black school about 10 blocks away. We used to walk to school. As we passed the white school I can remember being teased and being called the “N”-word as we walked by… .

“Finally, unrest developed in the Black community and we felt that we had enough living as secondhand citizens,” she said. When the movement came to Lynchburg, Gaines was 18. She tagged along with her sister Barbara.

Barbara, who died in 2004, was one of those arrested at Patterson’s Drug Store, but Gaines joined the next day’s Peoples sit-in without hesitation. “The four white girls ordered Cokes; I was ignored. When the drinks came, one of the girls slid her drink to me. I sipped it. Immediately, the manager told us to get out. He said this is the end, good-bye, and showed us the door.”

Alice Ball was the one who slid her drink to Gaines. She grew up in Texas with parents who were part Choctaw and taught her to treat all people fairly. “It was the air to breathe and the water to drink at my house,” she said.

In Lynchburg, the attempts at integration were resisted forcefully by many whites, including one woman who lived on Rivermont Avenue. She invited the R-MWC students to tea to try to coax them to reveal who at the college put them up to participating in the sit-ins, Ball said. The students let her know it was all their doing.

The day after the Patterson sit-in, the two R-MWC students were brought before the Judiciary Committee where they learned they would not be expelled, but received “stern” disapproval from the College administration for breaking the law, according to a story in the fall 2010 Randolph College Bulletin. They had to promise not to be involved in more protests.

The College lost several large financial supporters and three R-MWC trustees resigned publicly after Dr. Quillian refused to let the Board handle the decision. “It was a difficult time,” he said in the 2010 Bulletin article. “The lines were pretty well drawn in our community. I was devoted to all of our students, and I was torn as to how best to deal with a situation like this. I respected them and I shared their concerns, but I wasn’t sure this was the best way under the circumstances to try and bring change when others were trying to bring change in a different way.”

When the students returned to campus in January 1961, they faced a packed court hearing where they were found guilty and received the maximum sentence, 30 days in jail. They appealed the verdict, but later decided to drop the appeal, and on Feb. 6, people were shocked as the six students were led away in handcuffs. 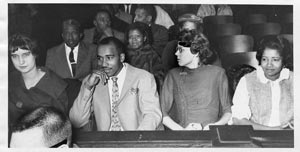 Jim Hunter joked that they got out after 20 days for good behavior but weren’t sure what that meant. Unlike the R-MWC students who said they read and studied, Hunter said he and Terrill Brumback mostly played poker with their cellmates.

While in jail, Hunter, who smoked, had been sent cartons of cigarettes as a way to show appreciation for his participation in the sit-in. Cigarettes were the currency of poker. “I wasn’t a great player so that made me a popular player,” he said.

Hunter added, however, that he did manage to read Dostoevsky’s Crime and Punishment, while behind bars.

Ball said the students’ jail time served its purpose. “They decided Lynchburg would never confront what was going on unless their own college students were in jail,” she said.

About the same time as the sit-ins, a group of Blacks were preparing to start the court case that would desegregate E.C. Glass High School. Owen Cardwell, who became one of the first two Black students to attend the school on Dec. 29, 1962, said he has thought a lot about the events that got his attention as an eighth-grader in 1960.

“The key thing that stands out for me was there was a two-fold strategy: public accommodation and public education,” Cardwell said.

Caldwell believes the sit-ins in Greensboro, North Carolina from February to July 1960—which were a pivotal part of the national civil rights movement—brought greater awareness to the Blacks in Lynchburg. “In a real sense, the Patterson sit-in launched the Civil Rights Movement here in Lynchburg,” he said.