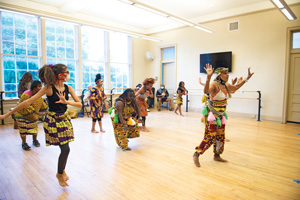 The beat of the drums was powerful and hypnotic and seemed intrinsically connected to the dancers leaping and gesturing adeptly across the floor. Dressed in beautiful, bright costumes, the performers seemed focused but also free. Their unified movements indicated that they had clearly rehearsed rigorously for this performance, but there was an easy exuberance in their presentation that created a relaxed, yet dazzling, environment—you couldn’t take your eyes away from them.

I first saw the Kuumba Dance Ensemble perform in 2018 at the Lynchburg Public Library, where I work as a youth services library assistant. On that day, there was someone else behind the scenes who caught my eye as well. Directing the dance routine was ensemble founder Sheron White. Her pride in her students was a joyous thing to witness. I was immediately struck by her positive and infectious energy and by the camaraderie she had fostered within the company. I knew then that I wanted to be part of this extraordinary group, and I got my chance to do so the following year.

Last fall, I had the privilege of participating in White’s Adult Afro-Caribbean dance class through Lynchburg Parks and Recreation. She and the other members of Kuumba made me feel so welcome and encouraged me to express myself at a time in my life when I really needed an outlet to do so. It was one of the best and most freeing experiences of my life, and I cannot thank Sheron enough. It is an honor to share a piece of her story and spotlight the important work she’s doing in our community.

White had a strong and varied dance background before eventually focusing on African dance in the mid-80s. In 1986, she moved from Lynchburg to Baltimore, where she taught dance at several middle schools and joined an African dance company. Her dance teacher suggested that she visit Africa, and she did so in 1996. 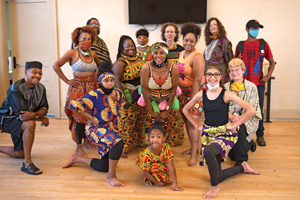 “My professor said, ‘You cannot teach African dance unless you go to Africa.’ So I went to Senegal, West Africa,” White recalls. “I learned so much. The culture in Africa was so amazing and accepting.”

Upon her return to the U.S., White moved to a different dance company in D.C. and became a principal dancer. She ultimately decided to move back to Lynchburg in 2013 and established Kuumba Dance Ensemble in 2017.

Kuumba was originally called “Lynchburg Afro-Caribbean Dance Ensemble,” but White found the name clunky and decided to change it.

“The reason I named it ‘Kuumba’ is because when I went to Africa, they named me ‘Kuumba’,” says White. “At first, I hated that name! We had a naming ceremony and everyone else got these cool names—I can’t remember what they were—but I got ‘Kuumba’? Well, that was my own inability to understand what that name meant. It means creativity. Come on, Sheron!”

Over the past three years, Kuumba has grown from four adult dancers and one drummer to about 40 dancers—30 of which are children—and seven drummers. A partnership with Lynchburg Parks and Recreation and the aid of donors such as the Greater Lynchburg Community Foundation have added to the ensemble’s momentum, and even a global pandemic hasn’t slowed it down.

“We wanted to engage our children and keep them motivated during the pandemic,” White says. To that end, White connected with a hip-hop instructor from Alabama who offered virtual hip-hop classes for Kuumba students twice a week.

Kuumba also participated in the Academy Center of the Arts’ Juneteenth 2020: An Exercise in Resilience event on June 19. The live-streamed event, which was put on by the Academy, the Juneteenth Coalition, and The Listening, Inc., featured several Black artists, performers, and local figures. 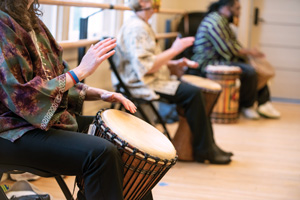 “The pandemic was in full bloom, so we practiced in my backyard,” notes White. “We were limited to ten people. It was difficult, but we made it happen.”

Part of the difficulty was learning how to work in masks, which includes practicing proper breathing techniques.

“We actually ended up performing in masks made by Cynthia Hudson, one of our drummers and seamstresses,” says White. “During practices, I always instruct the students to walk away, remove their masks, take deep breaths, and drink lots of water when they get winded.”

Safety is paramount for White, who cares for her 94-year-old mother. “It is huge for me to socially distance and keep things safe for everyone,” she says. “In addition to wearing masks, we take temperatures before classes. When bad things happen, we don’t get discouraged. We problem solve and figure out how to make things work.”

White and other members of Kuumba resumed classes in early July. Participants were able to choose between in-house lessons at Lynchburg Parks and Recreation and online lessons. Kuumba will hold a virtual recital on November 7, and White’s inspiration for the theme of the performance is very close to her heart.

“There is a book written by Mychal Wynn called The Eagles Who Thought They Were Chickens that I used to share with my students when I worked in schools,” White says. “I use this book to help children understand that they can soar and feel good about who they are no matter what other people think. This year, Kuumba is going to draw inspiration from this book to catapult us into talking about the beautiful eagles of Africa and how they soar, and about how when people cut you down, you rise above.” 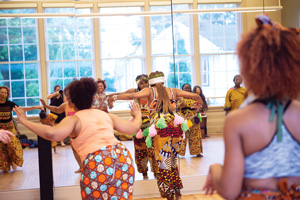 In preparation for the recital, instructors from Africa will hold virtual dance classes and teach choreography inspired by eagles while White comes up with her own twist on the theme for additional choreography. Although tickets and other details are still in the works, there will be an opportunity to make donations to support Kuumba’s continued growth.

Kuumba also plans to perform at the annual Kwanzaa celebration at Miller Park on December 30 if conditions allow, and White hopes that the celebration will be extended next year. “In 2021, we’re looking at having Kwanzaa celebrations each of the seven days of Kwanzaa,” she says.

As Kuumba continues to adapt and thrive through these unprecedented times, the overarching goal of the group—to spotlight and honor African culture while also supporting and celebrating other cultures—will stay the same.

“I believe that, in Lynchburg, culture matters. Whether the culture is white, Black, Mexican, Asian, or something else, it’s rich here,” says White. “It’s a good idea for us to learn about other cultures. We wouldn’t be afraid of different cultures if we tried to understand where those cultures come from. We [at Kuumba]see what we do as an opportunity to teach people about African culture. When we perform, we hope to provide instruction, share a rich tradition, and show that we are all more alike than unalike. This is my calling.”