Jennifer Woofter opened the door of her circa 1907 Rivermont Avenue home in Lynchburg wearing red lipstick and a wisteria-colored linen dress she sewed herself, looking every bit the chic urban homesteader she appears to be on Instagram (@weboughtamanor).

“I am living my best ‘Lady of the Manor’ life!” she said with a laugh, as she ushered us inside the impressively proportioned property she shares with her husband of 13 years, Bill Bohn, and their three children. The grand dame of the home, with its red brick and soaring white columns, cleverly conceals a large swatch of land out back that is host to a lush garden and a gaggle of pets, all living happily in the center of the city. It’s a place that invites life at every turn, and the story of how the family landed at such an address is just as surprising as the way they have chosen to live in it. 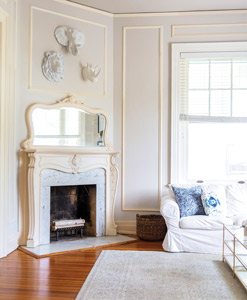 “The Manor House”
“We were living in Northern Virginia, and we had just adopted two of our kids and were suddenly going from a two-person household to a four-person household and paying outrageous fees for daycare and it was just really expensive and a fast pace of life,” Jennifer said as she began the story of their big life change in 2013.

One day Bill found the stately Georgian-style home on a website for old houses and sent it to Jennifer with a text jokingly saying, “We should buy this house.” But things quickly got serious at Christmastime when the family visited Bill’s parent’s home in Charlottesville and decided to drive down for a look.

“We left the kids with their grandparents, and came down to Lynchburg and spent the night. And we toured the house and we were like, ‘This is really cool, we should buy it’—so we did!” Jennifer exclaimed.

Within 60 days, the family had uprooted their old lives, sold their home in NoVA, and moved into their new-old home in Lynchburg. 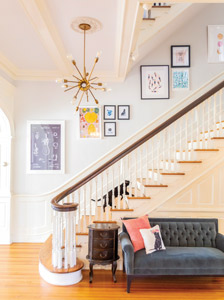 “We didn’t know a single person, we had no connection to the community, but I think what we quickly found is that Lynchburg is a place where you can make a home and find your community. That was 8 years ago and we have been here ever since,” Jennifer recalled.

One of the aspects that attracted Bill and Jennifer to the home is its rich history. The 115-year-old property has had many chapters, beginning as a single family residence before transforming in the 1960s into part of a private girls school known as the Seven Hills School. Later, it became rooms and dormitories for the Virginia School of the Arts, then had a stint as a commercial office space before finally being converted back into a single family home. 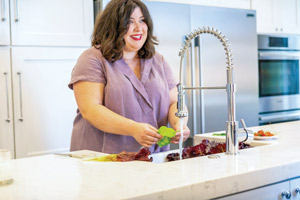 The Kitchen
In a home this large and this old, there will always be projects. But Jennifer and Bill decided right after moving in that the only major renovation they wanted to undertake was the kitchen. What used to be two rooms—“a tiny little breakfast room and then a quite small kitchen”—soon joined to make space for an expansive kitchen the family could comfortably enjoy for years to come.

“We’ve got three kids and Bill loves to cook and while [the former kitchen]was beautifully done, it just wasn’t functional for the way that we live,” she said.

It took 11 months, but the result is a kitchen that remains aesthetically true to the home. Among the many thoughtful changes to the footprint is an expanded door frame with custom pocket doors made to match the originals that opens to the area they now use for dining. They also married in multiple modern amenities, including a few splurges. For Jennifer, that included two dishwashers and two sinks—one for cooking prep and one for washing produce. 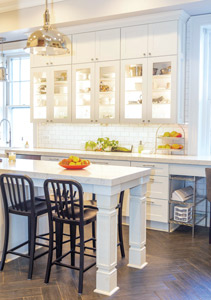 “Bill is the cook of the family, so he definitely had a perspective of the kind of stove he wanted and the functionality of the ovens, and I just wanted it to be pretty,” she said.

Throughout the kitchen are reminders of the vibrant life happening just out the window, from leafy greens soaking in a sink and canning preserves in glass-front cabinets, to chicken and duck eggs resting on a custom egg holder made by Jennifer’s dad. A little bit country, a little bit glamour, the kitchen at the heart of the home now represents exactly the kind of life the family has worked to build there. 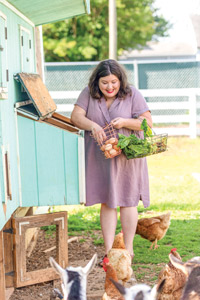 The Animals
To visit the manor is to run straight into animals of all varieties. Greeting you at the door is Lucy, the black rescue dog. Four black cats also flit throughout the home because “we are an only black pet household,” Jennifer said unapologetically.

Out back in an expansive gated area next to the even more impressive garden space are even more critters—three goats and about 14 chickens and ducks to be precise.

“Hello friends,” Jennifer greeted the goats, Jezebel, Charlemagne, and Scheherazade, as she walked past a teal chicken coop while the yardbirds scrambled around underfoot.

The coop’s bright color was at one point a topic of much debate, Jennifer said, but she loved it and won that round. Where she often concedes is the “how” of what Bill prefers when it comes to structures. 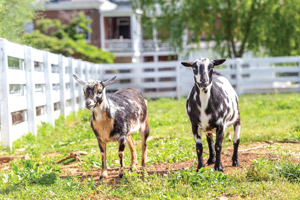 “Because Bill’s profession [as an engineer]is dealing with natural disasters, everything he builds is apocalypse-ready. Everything is sunk into concrete. If there’s a hurricane, we are coming out to the chicken coop,” she said.

With this many living creatures in one place, funny stories are never far behind. A memorable one took place right after the family first got the goats.

“When we first brought home the goats six years ago, they escaped and got on the roof of the house. People were calling us, like ‘There are goats on your roof!’ And I said, ‘Yeah, I know… I will get to that later!’” she laughed. 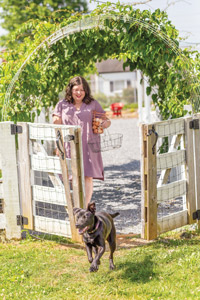 The Garden
“I don’t think I ever saw myself as a farmer,” Jennifer conceded as she walked under the kiwi-vined arched trellis into the family’s massive garden project.

The family has taken full advantage of their 1.7 acre lot, which now boasts 1800 square feet of garden area with 52 raised beds and a full drip irrigation system. An area is cleared for a future greenhouse build. The space is verdant with growth, and each season brings something new to do.

“Our process is, Bill grows and plants and I harvest and process in whatever format that looks like,” Jennifer said. 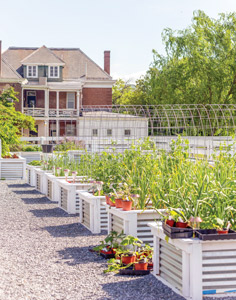 The backyard didn’t always look like this. It once held three tennis courts and, by the time Jennifer’s family moved in, the two remaining tennis courts were in bad shape. So they saved up and removed them and built the raised beds in their place.

Jennifer relayed that many lessons have been learned as she and Bill have dialed in what they wanted in the garden and how they wanted it to function for their daily life. Some of those lessons came down to marital compromise.

“Bill has the patience of a saint,” Jennifer said. “I decided I wanted all those raised beds painted white instead of natural wood, and heavens if he didn’t spend all summer painting those, along with the kids.” 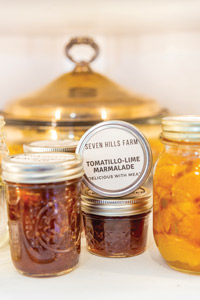 The Mission
Perhaps the most rewarding part about the work of their hands is that the family is able to benefit others from it as well. With so much shareable produce growing, they set up a self-serve stand on the porch for people to come year-round, with the goal of one day building a full farm stand. They also donate a lot of their bounty to the Lynchburg Daily Bread. The rest sustains them throughout the year.

While the historic home and its grounds have certainly been a major undertaking, the benefits of the lifestyle they created have also helped them to put down intentional roots in their adopted city. 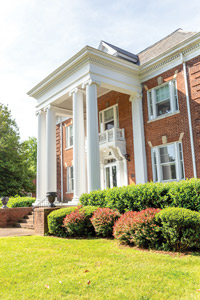 “One of the most rewarding parts of having the animals and the garden is it has really connected us to our neighbors, people who stop by and say hi all the time, the neighbor kids come by. Moms walking their kids around in the afternoon stop by and feed the goats,” Jennifer said. “It’s just been fun.”

Simple Chive Blossom Vinegar Recipe
Jennifer discovered that the chive blossoms from her garden “make a beautiful pink vinaigrette.” Using the guidance of The Spruce Eats website, she places the chive blossoms in a clean jar and pours white wine vinegar over them until they are completely covered. “Let it steep for a few days and voilà, so easy!” she said.