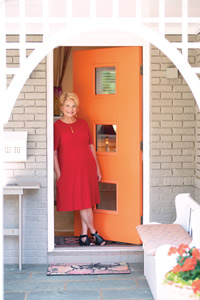 Although I hadn’t met Leah Weiss in person yet, once I walked up to the bright orange front door of her Lynchburg home, I had a preview of the personality I was about to encounter. Before I could even knock, Leah was welcoming me into her warm living room with unique artwork covering every wall. Many of the pieces were created by her son, local artist Paul Clements; Leah crafted many others herself through the years.

But I wasn’t there to talk about the visual arts—but rather the literary arts, Leah’s rising fame and how she became a bestselling author after retirement. Her first book, If the Creek Don’t Rise, has sold over 100,000 copies since it came out in 2017. Already following in its footsteps is All the Little Hopes, released last July and named a Best New Book for Fall by Country Living Magazine.

Shelley Basinger: I was so happy to learn from your bio that you are a fellow Tar Heel! North Carolina is the setting for All the Little Hopes.

Leah Weiss: We are Tar Heel sisters, aren’t we? I was born in eastern North Carolina, and that’s where my mother grew up as well. She was one of 15 children, born in 1926 on a tobacco farm, with no running water and no electricity. Back in 2004, when I was still working at Virginia Episcopal School as Assistant to the Headmaster, I hoped to write memoirs about her life. I recorded our afternoon conversations. I remember her saying, “I never thought anyone would be interested in my simple life.” We didn’t know at the time that she had lung cancer and would be gone in five months.

SB: I’m sure you treasure those conversations now. What did you learn from her that helped you lay the foundation for this book?

LW: One afternoon, she said German POWs helped with the tobacco market in 1944. I had never heard of Nazis in Carolina. I ended up talking to a historian in my birth town of Williamston, NC, that was home to one of the 18 NC camps utilizing 10,000 POWs working tobacco, peanuts and cotton. I visited Williamston’s museum and saw photos and read articles. And yes, 355 Germans had lived and worked in there for two years. I thought they would be the heart of the next book. 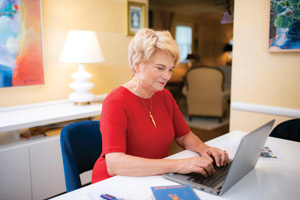 SB: What changed your mind?

LW: The memories that community told about the Germans were tender ones. While I knew I wanted to include them in the book, I needed a grittier plot with a darker underbelly. Enter Nancy Drew, my childhood idol. She was exactly the assistant I needed.

LW: After trial and error, I ended up choosing two 13-year-old girls as narrators of a war story that spanned three years. I named one Lucy for my mother and the other Allie Bert for her mother. They were different but united by their youth and their insatiable curiosity. Nancy Drew became a tool to get the girls into trouble as they solved a local mystery that in their mind grew into The Case of the Three Missing Men.

SB: What is your approach when determining a plot line? Do you plan it out or let it evolve?

LW: I’ve tried outlining (which is logical), but my characters never follow directions. My goal in both books—besides putting tension on every page—was to find interesting characters to tell the story. I look for a balance much like a delicious buffet: starchy, sweet, spicy, and some quirky characters thrown in for good measure. It takes a variety of unforgettable characters to create a cohesive community. 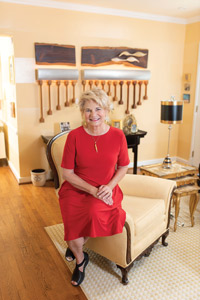 SB: What type of writing training or education do you have?

LW: I don’t have much formal training and always tell people I’m still learning the craft. I wrote some short stories beginning with my mama’s memoirs, then wrote a book that didn’t sell. I took my first writing class in 2014 at Wild Acres near Little Switzerland, NC. It’s a magical creative center with many different offerings besides writing. Ever since, I’ve returned for the two-week Writers Retreat and Workshop.

SB: What positive role do you think reading plays in our often chaotic world?

LW: Imagination is an amazing gift, something we are born with but it needs to be fed or it becomes stilted. Reading takes us everywhere. And I love reading out loud and encourage the practice. My background was in music, so I love the rhythm and poetry of language.

SB: And finally, my favorite question. What’s next for you? Will there be a book number three anytime soon?

LW: How I wish I had a clear vision today, Shelley, but the good news is that a premise is percolating. For now, I’m enjoying this wonderful ride with All the Little Hopes and hope it will have the staying power of If The Creek Don’t Rise.

You can find signed copies of Leah’s book, All the Little Hopes, at Givens Books on Lakeside Drive.
Visit her website, www.leahweiss.com, to learn more and also send her a message.