As Melody Hicks stood on the scale, the numbers flashed 299.8 pounds. It was at that moment she realized she needed to make a change.

Hicks wasn’t sure where to start. Over the years she had tried programs, but nothing seemed to stick. But after her father offered to pay for a year of personal training, Hicks decided to look into finding someone to help her lose the weight for good.

“I had always made fun people that were into gym culture,” she said. “It’s kind of ironic now that I’m in that world, but I never understood why people wanted to go to the gym so much.”

Around this time, her brother Mark was working with local trainer Ben Crosswhite. Mark had already lost nearly 90 pounds himself. During his training sessions, Mark confided in Crosswhite about wanting to see his sister lose weight.

“I finally decided to reach out to Ben, and I was thinking, ‘Nothing is going to happen. He’s not even going to happen,’” Hicks said. “But he ended up emailing me back and said, ‘I’ve been waiting for this email for two years.’” 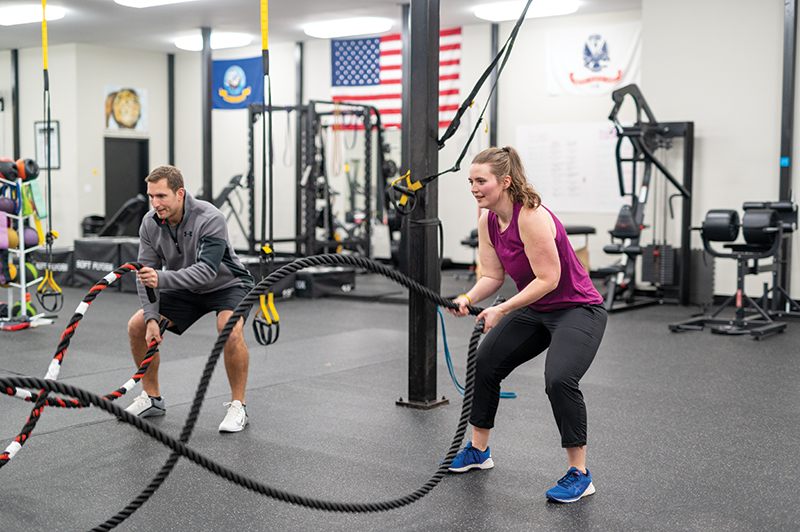 For Hicks, the thought of working out was intimidating, especially for someone who considered walking down the street as her only form of exercise.

“I had played sports in middle school,” she said. “As I started to get bigger, I stopped. My father was a pastor and we moved around a lot so I saw food as a comfort. You know how some people can eat whatever they want and stay skinny? For me it was the complete opposite. I felt like if I ate a few cookies, I would gain two pounds.”
But Hicks powered through her fear and began training with Crosswhite.

“I remember day one like it was yesterday,” she said. “I did a few squats, battle rope, and walked on the treadmill. My body was about to get the shock of my lifetime. As I kept seeing my weight go down, I was more encouraged to keep going. I became accustomed to my new lifestyle and diet.”

By the end of the first week, Hicks lost eight pounds.

Then four. Then six. Each week, she saw progress and continued to gain confidence.

“I think what made me so comfortable around Ben is that he’s a faith-based trainer,” Hicks said. “God is my rock and my everything, I loved being able to train in that kind of environment.”

Within a year and a half, Melody lost 150 pounds.

“That’s unheard of,” she said. “But I had accountability. I kept a food journal where I was writing down everything I was eating and bringing it to my trainer to check off on.”

And now nearly six years later, Hicks has still kept the weight off.

“The next part of my journey is getting excess skin removal surgery,” she said. “Last year, I had my first surgery where they basically did a 360-degree cut all around my body. I had a year of recovery but removed the source of chronic pain I was having post–weight loss. I have come back stronger and am still seeing progress in my journey of a healthier me.”

Now, Hicks wants to encourage others with her story. So far she’s spoken at local churches about her weight loss journey, but she hopes to touch people all around the world. Hicks also now works at Crosswhite Athletic Club as an executive assistant.

“I continue to strive toward my best self: physically, emotionally, and spiritually,” Hicks said. “This has been the journey of a lifetime, my life change. I have fallen in love with exercise and eating healthy. I’ve also realized that God wants the very best for me and He was waiting for me to call out to Him and ask for His help.”