Just in time for barbecue season, two of the region’s top pitmasters are here to help you up your game It’s one of the oldest

Just in time for barbecue season, two of the region’s top pitmasters are here to help you up your game

It’s one of the oldest cooking techniques around and requires hours—if not days—of preparation, along with a sizeable amount of “trial and error” experience, to be successful.

Despite all of this, we can’t get seem to get enough of those delicious smoked meats.

“Barbecue is already something that people gravitate toward down South,” says Ken Hess, owner of County Smoak on Timberlake Road. “People are drawn to the smell of smoke and fire. It’s something in our genetics.”

Add in reality TV shows such as “BBQ Pitmasters,” the introduction of new and improved barbecue technology, and lots of time at home during a worldwide pandemic, and it feels like everyone we know is spending their weekends gathered around their backyard grill or smoker.

Hess has been mastering his barbecue technique since working as a catering chef at the Greenbrier more than two decades ago. In 2002, he participated in his first barbecue competition right here in Lynchburg. He later returned to Central Virginia to open County Smoak in 2020, and a cult following for the restaurant’s mouthwatering meats was soon to follow.

Luckily, you don’t have to have a culinary degree to get really, really good at your smokin’ skills. Marvis Trent, owner of Blue Ridge Barbecue, laughs when reminiscing about his humble beginnings many years ago.

“First thing I ever tried to smoke was chicken on a Weber grill,” he recalls. “And it was awful, absolutely awful.”

Trent, who has been a part of the local restaurant industry since 1976, also recalls a failed attempt to add a barbecue menu at Cattle Annie’s when it first opened.
“We thought if we had the equipment, that’s all we would need,” he explains. “The right equipment helps, but knowing about rubs and cook time… there is a lot of trial and error.”

Trent took his passion for barbecue to his own backyard—where there was less pressure—slowly improved his end result, and opened his own business that’s become a local favorite, Blue Ridge Barbecue, in 2010. They have expanded to two locations: one on Timberlake Road and another in the Graves Mill Shopping Center.

While they are experts now, these two men know what it’s like to be at the beginning—and they also know the pang of disappointment you might feel when you take a bite of your 48-hour project and it’s just not quite what you wanted.

Read on for their insight and advice as we kick off grill and smoker season.

You’ve gotta know how to use it.

First things first: we want to speak directly to the folks who are in the market for a new grill or smoker. There are so many different types of products on the market—and a limited number of pages in this magazine.

Hess is a big advocate of ceramic cookers, such as The Big Green Egg, for their versatility. (He actually owns six of them and admits that “it’s a bit of a problem.”)
Trent adds that right now, Oklahoma Joe’s products—a brand of offset smokers and grills—are having a moment. There are also pellet grills, cabinet or vertical smokers—the list goes on and on.

But here’s the thing: it’s not about which type of grill or smoker you have or how much money it cost you, but rather whether you know how to use it.

“The general backyard enthusiast can go to Lowe’s and walk away with something for $150 using wood or charcoal and come exactly in line with what they would find in any barbecue restaurant,” Trent says.

Hess adds, “Whenever someone asks me which kind of grill or smoker to buy, I always ask them three questions: what’s your budget, how much involvement do you want, and how much room do you have?”

Answer these questions, talk to your friends about their experiences, and know that you can be a successful smoker—if you put in the effort.

Splurge on a really good thermometer (or two).

A thermometer is the one piece of barbecue equipment that is non-negotiable.

“Most cookers now, whether it’s a propane cooker or charcoal, have pretty decent temperature gauges. But there is no such thing as too many thermometer probes,” Trent says.

Hess adds, “Thermometers are the key because a lot of times people are like ‘it’s been cooking for 12 hours, it’s got to be done,’ but each pork butt is different. We have a target for 203-210 degrees for our pork butts, but sometimes it could be 212 degrees before it’s ready.”

Hess uses Thermapens at his restaurant and at home. You can even find thermometers and smokers with Bluetooth capability so you can check the temperature of the meat from your phone any time, anywhere.

Timing really is everything.

We could also title this section: “Get used to counting backwards.”

“Give the meat plenty of time to rest and let the juices redistribute,” Hess explains. “The bigger the piece of meat, the longer you need to let it rest.”

You will also need to factor in plenty of time before cooking for seasoning. Trent has friends who start seasoning their meat days before they plan to cook.

“They want that seasoning to permeate the meat as much as possible,” he explains, adding that he brines all of his poultry at least 12 hours in advance, 24 hours if possible.

“A brine is just a salt and water solution and brown sugar or white sugar to offset the saltiness,” he adds. “It helps whatever you are cooking hold in moisture a lot better.”

Whether it’s to show off your prized piece of meat or to just “make sure” everything looks okay, you have to train yourself to stop opening the lid of your grill or smoker.

“Every time you open the lid you are letting heat out,” Trent says. “It adds at least 20 or 30 minutes to the cook time. The meat cooks better if it’s a constant temperature versus a fluctuating temperature.”

Hess agrees and says a long period of low, regulated temperature (aka “low and slow”) is truly the foundation of good barbecue.

Once you get closer to the end of the cooking time, it’s okay to check, because according to Hess, it doesn’t take long for a meat to go from undercooked to overcooked: “You have a 15- to 20-minute window to where it might jump to 220 and it’s overcooked.”

From your rubs to your wood choice, there are an endless amount of choices and combinations.

Keep in mind that smoking meat was historically a very simple affair.

“I had a customer who brought me barbecue and it was moist like it should be but it felt like you were chewing on a piece of charcoal,” Trent recalls. “I asked him how many different types of wood he used, and he said he used five [different types].”

There are some complementary wood combos out there, such as oak/hickory and apple/oak, Trent explains. If you choose any more than two wood types, however, you may end up with an unintentionally unpleasant flavor.

The same rule can be applied to rubs. Start with one that you like and then experiment with combinations from there.

Hess suggests keeping a barbecue journal—including details such as seasonings, wood, length of time cooked, etc. He used to do this back when he started. If you aren’t pleased with the end result, don’t completely overhaul your technique.

“When you make changes, change one thing,” Hess says. “Don’t change the charcoal, the rub, and the wrapping all at once. One thing at a time.”

Get in touch with your (meat) feelings.

You know how your Grandma just “knew” when a pie crust was ready to roll out by the way it looked or felt?

The more you smoke meats, the more you’ll start to get a sense of how they feel, which can tell you if they are ready.

“When we are training new cooks, it takes a good three to four months of pulling meats every day to for them to get the feel of it,” Hess notes.

He adds that the thermometer you use can be a good gauge of “readiness.” If the thermometer is hard to remove, your meat isn’t done; on the other hand, if the thermometer comes out easily, also described by Hess as a “hot knife through butter,” then you are probably good to go.

As we already mentioned, every piece of meat is different. The good and the bad part about barbecue is that there are no strict rules or cook times. It’s an industrious art full of endless options, “feelings,” and delicious dinner options.

Now that you know some of their “smokin’ secrets,” Hess and Trent also wanted to pass along their favorite recipes for you to try at home this summer. 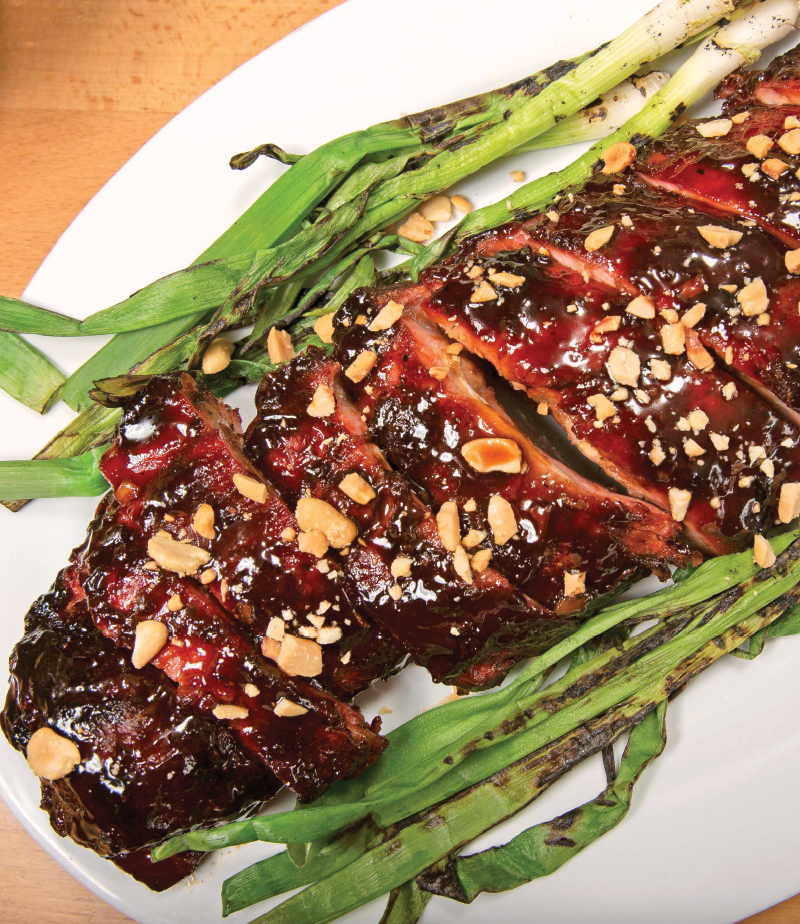 Directions
Mix all the ingredients for the sauce (except the cornstarch and water) and bring to a simmer.

Combine cornstarch and water to make a slurry to thicken the sauce. Slowly add the slurry until the sauce is thick enough to coat the back of the spoon. You can make this a few days ahead of time.

Combine all the rub ingredients in a bowl. This can also be made ahead and stored in an airtight container.

Set your grill or smoker up for indirect grilling. You do not want to cook these ribs directly over a fire. The rub and sauce for these ribs contains sugar and can burn.

Get your smoker to 275 degrees Fahrenheit. While the grill is preheating, remove the membrane from the back side of the ribs. Rub the Chinese mustard on each side of the baby back ribs. Then, season each slab with the dry rub. Place the ribs on the smoker.

After 45 minutes, brush or mop a light coat of the mop sauce on the ribs. (If you mop too early it will wash the spices off the ribs. Make sure the rub has set to the ribs before applying the mop sauce.) Mop the ribs every 30 minutes.

Continue to smoke the ribs until they become tender. (This can take 3 more hours.) You can check this by lifting the ribs and seeing how they bend. Another trick is to push two rib bones in opposite directions to see if the bones pull away from the meat.

If the ribs are close to being tender, apply the Korean barbecue sauce to each side of the ribs.

Cook for 10 more minutes or until the sauce becomes tacky.

Cut the ribs into individual ribs, garnish with chopped peanuts, if you would like, and serve. 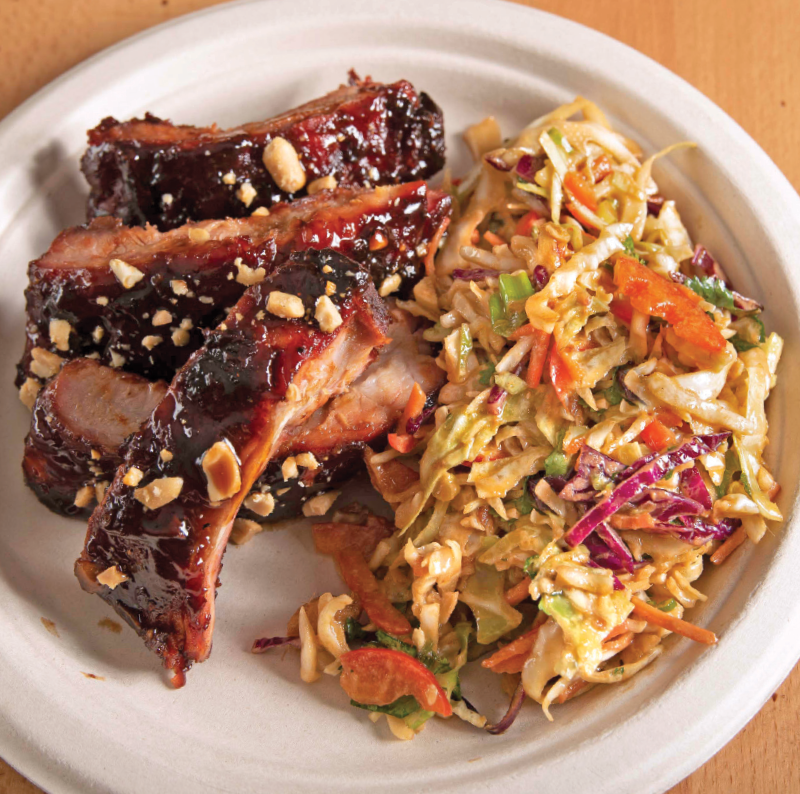 Directions
Add the dressing ingredients into a food processor and puree until smooth. Set aside.

In a large mixing bowl combine the shredded cabbage, carrot, and bell pepper. Add the dressing and mix well. Season the slaw to taste with salt and pepper. Refrigerate until needed.

Rub untrimmed pork loin with 2 tablespoons of olive oil and rub in minced garlic and chipotle seasoning. Sear all sides of the pork loin to a light golden brown.

Put 4 to 5 ounces of hickory wood chips into smoker box on cooker and then cook pork loin for 1 hour and 15 minutes.

Remove pork loin from cooker and place in roasting pan. Make 3 cuts from end to end about 1½ inches deep. Pour ½ jar of salsa verde over pork loin, making sure salsa fills the cuts. Place back in cooker and cook another 45 minutes.

Remove from cooker and pour remaining salsa verde over pork loin. Wrap pan in aluminum foil and cook for another 30 minutes or until internal temperature reaches 145 degrees, then remove from cooker and let rest for 10 minutes before slicing and dicing into smaller chunks. Spoon pan drippings over finished product.

Serve in tortillas with usual condiments, such as pico de gallo, avocadoes, or Herdez street sauces.