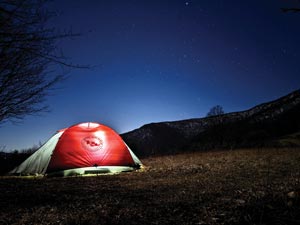 On a whim several years ago, Josh Sutton and his wife, Cassie, decided to hop on a plane and travel to the Mount Everest basecamp.

“We had read a book that encourages people to take mini-retirements throughout their life,” Sutton explained. “Since I work in real estate and that leaves my schedule a little more flexible, we looked at flights and found it wasn’t too expensive to travel during the off-season.”

That adventure planted a seed that kept growing as the Suttons later became a family of three. Now, they are off trying to hike the entirety of the Appalachian Trail by the end of the summer.

Hiking the A.T. is no small feat. Spanning from Georgia to Maine, the approximately 2,000-mile trail takes even the most experienced hikers five to seven months to complete. 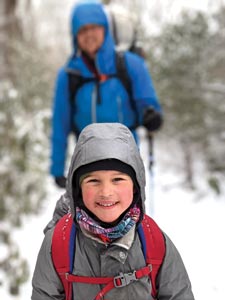 But what makes this adventure different is that the Suttons are bringing their 5-year-old son, Harvey, which would make him the youngest hiker to complete the A.T. if they finish.

And the Suttons are planning on it.

“Harvey is entering kindergarten in the fall, and we thought this was the perfect time to do something as a family,” Sutton said.

Hiking the Appalachian Trail has been a family goal for the last four years.

“We spent a lot of weekends training,” Sutton said. “At first, it would start out small by walking on the park trails with Harvey when he was really little and get him used to it. Then as he got older, we would try to go on a big hike every month.”

Alongside their years of training they also saved money. According to Sutton, the average hiker on the trail sets aside at least $1,000 a month. But you also must budget for expenses such as equipment, shoes, and transportation to hostels.

The Suttons started their trek in Georgia in January and were instantly met with snow and ice. 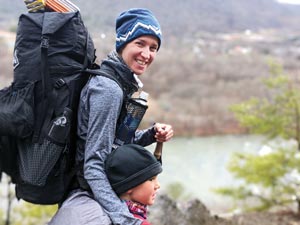 “It was pretty miserable at the beginning,” Sutton said. “I think in the early days we only saw the sun for about three days.”

At first, the trail was a ghost town. But now in the summer months, Sutton says they’ve seen a lot more hikers out and about.

“There’s all kinds of people out here,” he said. “There’s college students, retirees, couples, and people trying to do it solo. We’ve seen some of the same people as we move further up the trail. Most people can’t believe that we’re hiking with a five-year-old.”

But Harvey is taking it in stride.

“Some days I think he’s handling it better than me and my wife,” Sutton jokes. “He’s a champ. We play games with him like the ‘the floor is lava’ or freeze tag with other hikers. It keeps him motivated and focused.”

The family averages 13 miles a day on the trail and starts the day around 6 a.m. with a Cliff bar. 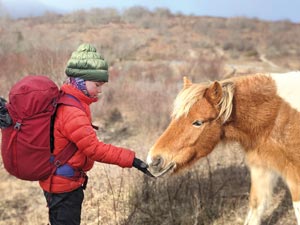 “We carry between [five to eight days]of supplies with us and restock every five days at hostels or in town,” Sutton said. “We carry tents, but on certain parts of the trail there are these three-walled pavilions you can stay in. Some of them have mice running around though and we try to avoid that. Most of the time we find a flat spot on the trail or near water where we set up for the night.”

Over the last several months, they’ve documented their journey through their YouTube channel and Instagram. Because of it, the Suttons have met up with some of their fans. They’ve also met others who simply want to support hikers on the A.T. through “trail magic.”

“It’s been great for Harvey to experience,” Sutton said. “Sometimes, you’ll find a cooler in the river with some extra sodas, or you’ll come off the trail and have people grilling up hot dogs and hamburgers for you.”

Sutton says that’s just what the trail community is all about. 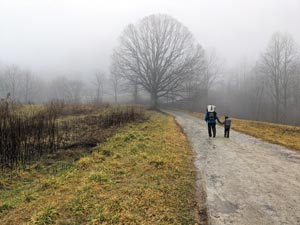 “Everyone is always looking out for each other and paying it forward. It’s a really giving community. We’ve been in towns where people have offered us their cars to get supplies, which is funny because after 10 days without a shower, you’d think people would want to stay away.”

While the community aspect is something the family has enjoyed, another part is being able to unplug from their busy lives.

“When we first started, I was picking up my phone and starting to scroll through apps before I realized I didn’t have service,” Sutton said. “When we crossed through Lynchburg, I had to stop and check in on work and file taxes. It was overwhelming to get plugged in again after living in the woods. It makes you realize that maybe minimal living is the way to go.”

If all goes according to plan, (and so far so good) the Suttons will reach Maine by the end of the summer. 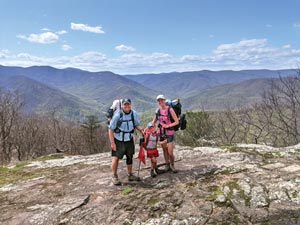 “No, we are not hiking all the way back,” Sutton jokes. “Our family is planning on meeting us at the top so we can celebrate with them and have some time with them to relax. Then we’ll rent a car and drive back to Lynchburg.”

Is this simply the first of many adventures for the family? Sutton says right now, they are simply trying to stay present in the moment.

“We want to finish this one first before we start planning again.”

If you’re feeling inspired to hike the Appalachian Trail, we asked Josh what you may need to get started. Living in Central Virginia, you have a lot of access to great trails. But to become a serious hiker, there’s a lot to consider. Here are his top pieces of advice:

CERTAIN ITEMS ARE HEAVIER THAN YOU THINK—“If you invest in a high-quality sleeping bag, then that’s going to be about a third of your weight [in your backpack],” Sutton says, but added that a good tent and sleeping bag “are where you want to invest your money.”

DO YOUR RESEARCH ABOUT WHAT TO PACK. He suggests a water filter and clothes for all types of weather conditions—“It could start out really cold in the morning and then really hot by the end of the day,” he says. “You have to dress in a lot of layers and plan for rain or snow, depending on the season.”

YOU WILL NEED TO PLAN AHEAD AND TRAIN FOR YOUR HIKE. “When you’re hiking long distances, you’re going to consume more calories, so your diet is very different. You need to eat more dense food with a higher fat complex.”

TRAINING SHOULD INCLUDE CAMPING OFTEN AND IN VARYING LOCATIONS, SO YOU CAN ADJUST TO DIFFERENT TERRAINS AND TEMPERATURES—“That was something we would do very early on with Harvey,” Sutton says. “We’d get him used to sleeping outside and then in the cold or heat.”

GET USED TO SMELLING YOURSELF—“Everything is more enhanced on the trail and there are periods of time where you go without a shower,” Sutton says. “You adjust to more natural smells and then eventually, you can smell people who are just starting out, so you can smell soap before you see people. It’s a weird experience.”